Hostels for the children 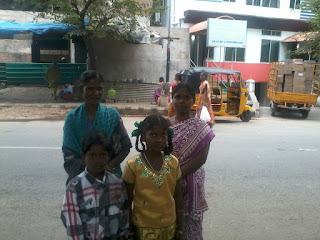 Eashwaramma is laid down with body pains after the chikunguniya attack. With her poor health, it has affected her badly. She is again asking me to find a good hostel for her two grandchildren. She asks how the children can stay dependent on her. We had tried hard for the children, after the trauma of murder of father, and abandonment by mother, to stay on with the grandmother, so that they have the security and love of a family and community. We assured Eashwaramma that all expenses would be taken care of.

But now the boy is ten. A fine boy, but running wild as the grandmother cannot control him. He can end up in bad ways in a couple of years if he does not have proper direction and discipline.

We worked on possibilities with a friend in Tirupathi to find a school. We decided we would pay the fees, or try to get some friend to underwrite it.

Eashwaramma came with the children, tense with what the future held for the children, and yet leaving the matter on us in faith. The children were neat, Sasi wearing his newest shirt, and Kavya in her shiny pavadai, and hair neatly plaited and doubled. We asked Annapurna to come with them. We were in Tirupathi earlier. Our friend took us to a regular school she knew, but the children failed the Maths tests. The school may have still agreed to take them in, but I was worried about the happy children getting labelled dunces forever. We backed out.

Then our friend put us in touch with the SOS village in Tirupathi. It was a five star space. The very washbasins were five star quality. It was as far removed from the realities the children live in as possible.  But there was also a clause. They wanted the children to break away from their own families, as otherwise they said the children would never fit in. They were right. The children from villages are used to freedom, and would never trade that for a golden cage. So they were allowed to go home only for 10 days a year.

We thought long and hard over this. But did not feel willing to make the choice of distancing Sasi from his grandmother, his village and his roots. Forever. We dropped that option.

Then we wondered about looking for upper class schools. And if there was an upper class school which may be ready to take the children, how will the poor dalit children fit in ? To anticipate how children who have had everything against them - dalit background, utter poverty, death of one parent, abandonment by another, poor schooling, undernourishment - will adapt to a set of children far better off is very very difficult.

So it was back to the village, and the Kothapeta school. We looked for a tution teacher for him. And Varalu was commissioned to sit with him every evening for a salary.

To deal with the problems of the disadvantaged is to place oneself in an unenviable position of making options where none really seem to exist. To try to help the poor is  fighting with hands tied behind one's back, blindfolded. And fighting battles after the war has been lost.

... after that, in future years, I have many times revisited this time, and wondered if I should have decided differently. And yet, understood, that the realities are completely unpredictable given the many imponderables.

Posted by Aparna Krishnan at 02:46