Eashwaramma, my neighbour, my friend

Eashwaramma, my neighbour, my friend, my moral compass. 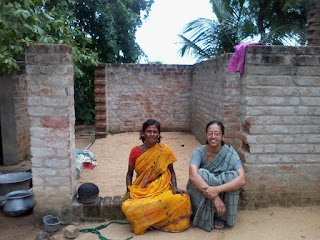 Her health is destroyed through a lifetime of poverty and poor nutrition and overwork. Her only asset is a cow, and a one room built under the govt scheme for the SCs. After her son got murdered, she is the sole support of her orphaned grandchildren. 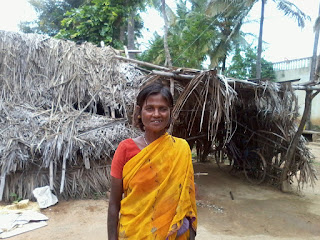 Initially the noticeable things about her are her emaciated look, her one blind eye and her other eye hazy with developing cataract. Her leg pains are unbearable, but she has to go and cut grass for her cow - her only asset.

Later when one knows her well, all that is noticeable is her decency, goodness, common sense and mental strength under soul destroying difficulties.

Her strength is her 'devudu' and her 'dharmam'.

From her I learnt many lessons.

She feeds the lady who comes by and asks for food. She tells me that it is dharmam to feed anyone who asks for food. In the drought she ran out of rice. A mendicant came, and Eashwaramma gave her a glass out of the last two glasses. The lady asked if she could give her some groundnuts, and Eashwaramma threw up her hands and asked her wherefrom she would get groundnuts. The lady pointed to the heap pf groundnut leaf stacked before her house. Eashwaramma explained to her that she had bought it for money (yet to be paid) for her cow as there was no grass in this drought.

It was while carrying this load, that she came down with a severe fever two months ago, the after effects of which are still with her. 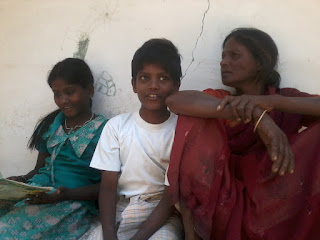 At the santa when I brought only two cubits of flowers for the village temple when it was my turn to offer worship, she made me buy ten, telling me that one should not be tight fisted with God. She had herself bought ten cubits when it was her turn to offer worship at the temple. Another time when she suddenly got to know that it was her turn at the temple the next day, she  walked three kilometers to the santa to buy what offerings she could saying ‘mana shakti kaadeki ivvaali’, meaning we should offer to god what we have the ability to.

She taught me goodness. When we shooed away our dog out of the house when sitting down to eat, she commented, “Isn’t that a life too? You lock it outside instead of giving it also food ? Set a plate for it in a corner and put food for it too.”

She showed me clear thinking based on common sense and fairness. When she was telling me about people going to the Moolasthaanamma temple to give up drinking, she also said, “Everything is finally in our hands. If we decide to stop, we stop. That’s all.”

The same clear thinking extends to everything. When I commented on Simhadri not giving enough to his sister Varalu who was deserted by her husband she said, “Don’t comment on others. We don’t know their constraints.” On dogs eating feaces she said, “Every life is made differently by the god.”

She showed me straightforwardness. I once bought some kerosene oil from her. I buy it from various people in the village as I do not have a ration card. When I told her I would pay her the rate I would have to if I bought it in the open market, she told me that she will not take more money from me in this manner. That she will only take what she would have got if she sold it to the local buyer from Kothapeta. She said that if she had need for more money she would ask me for it and take it. Given her dire circumstances, this was a rare integrity. But it is not uncommon in this village.

The same integrity shows in her giving opinions when asked for. They are based on honesty and sensitivity. About the questionable madhyastham which went against the Maadiga Kitu godu, where Chandra took away his cow she said, “Chandra’s family will not prosper with other’s properties. Especially in this case where they are so poor, and where Kitu godu’s wife was hoping to sell the calf and pay for her operation.” Being so poor, she has full sympathy towards the poorer. Referring to Mangamma’s daughter Poorna’s elopement, she said, “Poorna was not charged a fine as they have nothing.”

Her report about Madras to the village people was, “In cities dogs are taken grazing! At six thirty in the morning and at four in the evening people set out in droves taking the dogs walking. The people have servants to take the dogs out. Well bosomed girls in shorts and tight tops without even a upper cloth, their unevenly cut hair hanging loose all over their faces go walking with the dogs. The ragpicker community with their long skirts and upper cloth tucked in neatly and lots of bangles on their arms look far more decent”. She asked me why so many people keep dogs and said that a cow would give milk and dung and calves ! She asked if it was for prestige. She was not impressed by the city or its luxuries.

Similar is her assessment of the modern preganancy care in hospitals, “Pregnant mothers are given a thick book at the hospital. They have to go every month, and are given endless injections. All they get out of these injections is long lasting problems. The traditional patyam and regimen is not followed.” ... 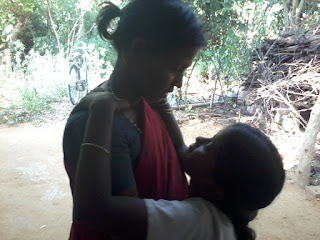 Posted by Aparna Krishnan at 18:22