Lata the heart patient from Tirupathi. 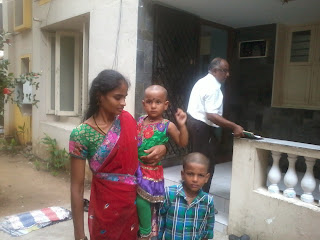 Lata, the heart patient, came to Dr. Girija today. My village people after having remarkable benefits from the doctor, referred her here. She and her husband sell corncobs on a cart for a living, and have spiralled into debt with this health issue. The poor live on the edge, and one such health crisis pushes them into destitution. She had been calling me and asking, and she came today.

Thin and pretty and smiling with two lovely kids in tow - and deeply anxious about her own survival as she has the two children. She has breathlessness and palpitations, feverishness, giddiness, severe headaches, an emptiness in the heart, a sense of fear, and unbearable heart pains if she talks loudly or or eats to full stomach, or overworks, walking breathless, But she will improve substantially as does every patient under the doctor's care. And the doctor spent a long and detailed time with her as she does with each patient from the village always.

But her story also left me feeling helpless, as happens so much these days. As the doctor tried to get to the root of the problem, to understand why the heart condition came she said that she had no parents and was brought up by a family which had found her. There she suffered mentally and was also overworked. Both these can cause heart illnesses. In class 9 she was married away, and she said life was better after that as her husband was a good, if very poor man, man and did not drink or even smoke. He worked hard, but had a spinal problem, and underwent surgery. The spinal pain continues, and so despite her unbearable heart pains, she works now at the mandi loading watermelons, and helping him. What rest can the doctor advise in the face of utter poverty ! The best medicines have been given but it feels like fighting with eyes bandaged and arms tied behind one, as one tries to address problems - by mobilising, or working out alternate systems of living and production and health. But as the swamiji said while explaining the Bhagavad Geeta, 'Our head will reel if we try to understand the whole picture, and we need to act as is given to us in our understanding and ability' 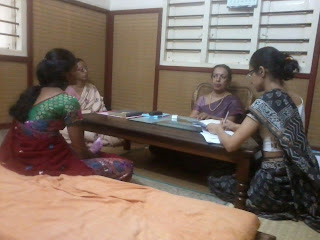 But anyway, the medicines and diet corrections the doctor advised will benefit her substantially. I got her medicines for 6 weeks, and the doctor asked her to keep updateing every week. The medicines were costly, and I am grateful to those who immediately held out a hand to assist. A heart condition of three years will need some extended treatment, but it will happen as will do what we can do, each of us. And when i write these stories I know that these just mean that there are a million more such stories, and the onus is on us to keep acting. Sometimes even in a sense of helplessness.

Lata called and said that she and her husband would not come tomorrow to see Dr. Girija as planned, but sometime next week. I was a little sharp, and asked why she was delaying. Then she said she had not managed to get together money for the trip. I told her to just organise the train fare, and that I would give that back to her, and that  the medicines we would buy. She then agreed and said she would come with her husband. He has a severe backpain compounded by a bad surgery at the government hospital. And has to work daily without a break. Though last time we had paid all expenses, still this time it does not cross their minds to ask, demand ... Each time I am humbled before the poor of this country.


Lata's husband was saying how after the spinal surgery for his backache worsened, and he has to give up his mestri work, and go and try to sell corn on a cart. He would not blame the doctors, and just said that they advised him to eat well, and as there was no money he could not, and that must be why he did not recover ...

Lata has recovered totally and her gratitude to the doctor was total, as she said that she had spent 30,000/-  on various tests and medicines so far, and as she kept worsening. On asking she said it was all private loans at high interest which they would slowly repay, while paying interest monthly. The ayurvedic medicines including her travel which had restored her health had only cost me 5000/-. And now another sum towards strengthening and tonic medicines for another month - money well spent.
She came with her husband who was subjected to wrong surgeries in the government hospital for a back pain which only worsened. Both their treatments are underway ... and as we ate together at a small hotel where a full meal costs 60/- her husband kept wanting to pay as they always want to. I has to push - and I promised to come home to Tirupathi and they could make me a nice lunch. 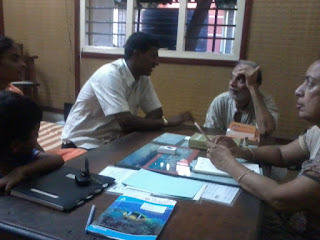 Lata came for the third monthly consultation with Dr. Girija. Between the first two visits she had recovered very well, and all her heart problems, which had stayed unanswered for years had got resolved. I was surprised to see her a little worse this time. She said that the pricking pain in her heart had started again after some problems and anxieties at home. She would not say more and I did not ask. 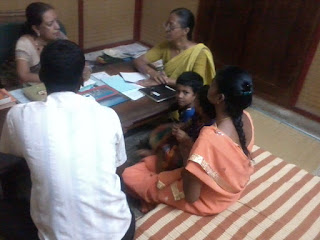 But the doctor, with her right, asked her to elaborate, and her husband Eashwaraiah explained that the creditors had all swooped down on their home and sat before the house a whole day last week. He is a mason, and when he went to the government hospital a few years ago with a severe backache, they did a spinal surgery. He was bedridden for two years after that, and in that period debts upto 2 lakhs had mounted. Now he spends 3000/- per month on paying just the interest on those loans each month. There is no way to pay back the loan itself.
He said that each morning they are woken up by the creditors at five in the morning. For such decent and honest people, this is seen as one of the deepest disgraces. He said that as he did not get work for a week, he again could not pay that week's interest, and the creditors all descended together. And his wife's heart problem restarted .
The doctor and I listened in silence. All our interventions seem so irrelevent. Yes, Lata's heart condition has improved almost totally. But how much can one medically treat a heart patient, when the trauma of poverty and debt overhangs her every moment of her life. 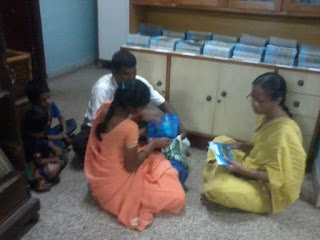 Anyway for what it is worth, Lata is 90% well. Her husband Eashwaraiah who also came last time for medicines for his back is 70% well, and is able to get back to work reasonably he says. They brought their son this time to see the doctor. Another meaningless spinal intervention was done for him when he was a 1 year child and has left him with a backache. I got them medicines for the three of them for another month or two costing about 8000/- in all, and we had dinner at a small hotel where a meal costs 50/-. I asked them to stay the night with us, but Eashwaraiah said he had lost a day's wage today. And even if they get back past midnight today, he can go for wage work tomorrow. 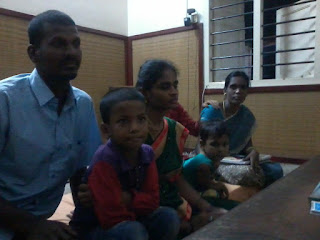 Lata and her husband and children came from Tirupathi. Lata's heart condition was completely resolved. Her husband was working as a mason and not having any of the severe backpains he was complaining of. The seven year old son who had poor appetite and backpains had no problem. The family came to report they were well. I again got them medicines for the next three months coting about 5000/- for all three of them together, as given a chronic state of undernourishment due to poverty, the doctor suggested the nourishing medicines be continued. 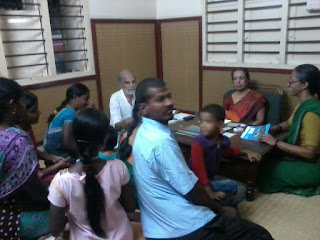 Lata came to consult for her concern of 'white discharge'. She said that she came here because she thought that if she went to an allopath she was certian they would suggest an hysterectomy. She was reassured and given some medicines which will address this well and completely.

A poor, labouring family reinstated on his feet.

Posted by Aparna Krishnan at 19:54