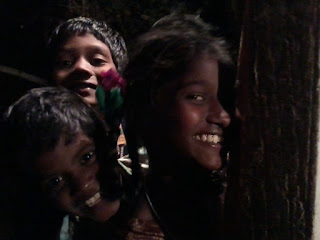 The story of the cycle


The school is 3km away, and it was a long walk for the children. As they were already
undernourished,  they used to come with leg pains daily. When friends offered to buy them cycles, cycles happened !

Sasi, Eashwaramma's grandson, made a flurry of phonecalls when I was away. When I called back, he shouted down the phone that he had a 'green' cycle, his sister Kavya had a 'blue and golden' cycle, and Redipa, the Madiga boy in the next hamlet, had a 'red' cycle.

Unable to let a chance go, I made him promise that every morning he would drink his milk and ashwagandhadhi at Varalu's, saying that the cycle gift had been made conditional to that. He needs that milk very badly.

Eashwaramma had gone to Piler with Balaji, Annapurna's brother, and got these finally. It must be a small celebration in the small home.

Sasi called me up a few days later with an urgent, 'Madam, no money in the cell, call back'. Two days back I had confisicated his new cycle after a few warnings. He was to have his milk and ashwagandhadhi at Varalu's daily with the other children, and attend 'tution' with Varalu every night. All my sweeness and charm failed, and I reverted to my stick. I told Varalu to lock up the cycle at my home.

Two days later I had a fair idea what the call was for. I called up and after a 'Baaunnaava madam' and exchange of mutual courtesies we were both silent. Then I asked him if he had attended tution the pervious days and he gave a thumping 'yes'. Then after some more silences, I asked him if he wanted the cycle, and he shouted down the phone 'Yes'. After a few more moralizing statements I permitted it, and putting down the phone could just see him cartwheeling home to get his cycle. 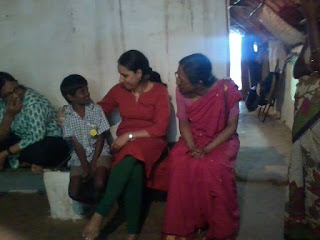 The new cycle, and the envy of his classmates filled his heart with unspeakable joy. He immediately moved to the SC hostel near the school where we had been registered. Later we heard from the other kids that he was ‘earning’ money there by loaning the cycle to other kids for rupees three per hour of riding. Such initiative and entrepreneurship I needed to nip in the bud because I was worried about the cycle ! When confronted with his deeds and misdeeds he stuck to the age old device of  children facing implacable adults – stout denial. So the cycle was duly confisicated for two days. Here Sowmya is trying to get further details of this venture from him, and only hearing the same stout denial.

Over the phone, I was updated by other children about his latest. On the way back from school, he gives his cycle to Vinay to cycle on from from Bandakaadapalle to our village, and hops behind his sister's cycle. That poor child Kavya has no choice but to pedal with him behind. He leaves his bag on his cycle, and Vinay cycles with that bag, and his own bag uphill, and pays the 2/- that Sasi demands for the privilege.  So Sasi is back into his entrepruener mode - and what happenns to the poor cycle is anyone's guess. I think I have met my Waterloo. Finally at this age. 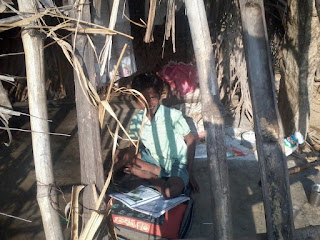 As Velu came in the auto to take us to Kothapeta the usual smiling well beloved faces came to see us off. Sasi hopped into the auto as his cycle was punctured as always and is grandmother had stopped trying to supply the 5/- for the puncture repair. When we saw him off I gave him 5/- to buy some sweet, and he ran and got a chart for himself which was needed in school. In these times getting an extra 5/- at home was hard, and the 11 year old gave up his sweet without a thought. And so village children live. 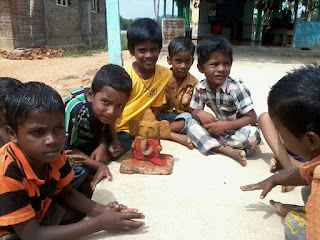 When he made the Vinayaka image with his gang, he used
his only five rupees that a relative had given him towards kumkum and turmeric for the image. No one had taught him that owning up an activity meant first stakeing one's own for it - the first lesson of ethical management.

When our friends Prasad and Jacinte came and stayed with us, Sasi and Prasad hit it off. I decided that Prasad could be pressed into service, and asked him to call up Sasi weekly from U.S. I knew Sasi would be thrilled and proud. he would then go from house to house for the next two hours, solicitously asking every child, "Prasad saar called me. Oh, he really did not call you up ? Really ? So sad ...". His day would be made. And his week, as he would count the hours, for the next Sunday call. And in that dream of happiness would hopefully do some studies, and abstain from temptations ...

One day Sasi called me and informed me that Prasad Saar had called him up thrice so far,  and once Jacinte had called him ... and when I asked how on earth he managed to converse with Jacinte, and in what language, he confidently said he had managed ... and knowing his ingenuity i believed him. Later i discovered that it was a marvellous piece of imaginary fiction that i has been listening to ... and that Prasad had only spoken to him once, and though Sasi had asked after 'Madam', she had not been ther.