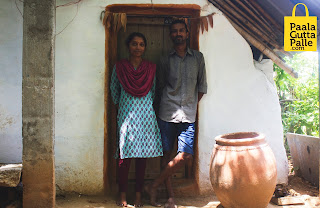 The best of people have happenned to PaalaGuttaPalle. The best of all places !
Lavanya Lakshmanan
Lavanya just happenned to the village in the simplest and most lasting of ways. Vignesh brought her the first time on one of his trips. And she became one of the village. And women took her in completely as one of them.
Many trips to the village, many shared meals, many jokes, many discussions. A saree which the women bought for her from their savings. And gave to her with flowers and bangles.
At each step, at each need, in her own style she stood with them, ducking the attention and making sure it was all on them.
There was an invitation from Goa for the exhibition. When I mentioned to her their need for someone to go with them, she said without a thought that she would go with them. She was in an IT firm then, but her priority was here. Without her the women could not have gone. And that week there, I realized later had built up their confidence to another level.
Many more shows. The exhibition in Chennai. The trip to Tanuku for the conference of Livlihoods. When News Minute came to take the story, she went from Salem to the village for just a day.
Everywhere she strengthened them, by giving them the space to them fully and just staying there.
The background accounting work. The creation and maintainance of the website, every load has been here. Done cheerfully and consistently.
Anything I write is too less, and so I will stop. 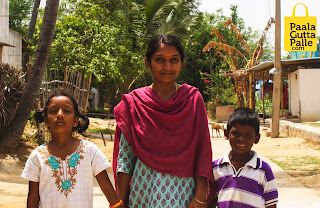 Posted by Aparna Krishnan at 01:05