Paalaguttepalle: A story of women with will, working in solidarity- By Yogita, PROVOKE Lifestyle 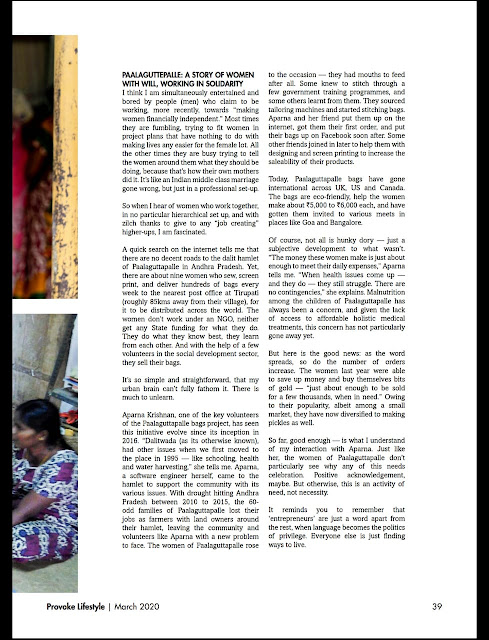 "I think I am simultaneously entertained and bored by people (men) who claim to be working, more recently, towards “making women financially independent.” Most times they are fumbling, trying to fit women in project plans that have nothing to do with making lives any easier for the female lot. All the other times they are busy trying to tell the women around them what they should be doing, because that’s how their own mothers did it. It’s like an Indian middle class marriage gone wrong, but just in a professional set-up.
So when I hear of women who work together, in no particular hierarchical set up, and with zilch thanks to give to any “job creating” higher-ups, I am fascinated.

A quick search on the internet tells me that there are no decent roads to the Dalit hamlet of Paalaguttapalle in Andhra Pradesh. Yet, there are about 9 women who sew, screen print, and deliver hundreds of bags every week to the nearest post office at Tirupati (roughly 85 kms away from their place), for it to be distributed across the world. The women don’t work under an NGO, neither get any state funding for what they do. They do what they know best, they learn from each other. And with the help of a few volunteers in the social development sector, they sell their bags.

It’s so simple and straightforward, that my urban brain can’t fully fathom it. There is much to unlearn.

Aparna Krishnan, one of the key volunteers of the Paalaguttepalle bags project, has seen this initiative evolve since its inception in 2016. “Dalitwada (as its otherwise known), had other issues when we first moved to the place in 1995, like schooling, health and water harvesting,” she tells me. Aparna, a software engineer herself, came to the hamlet to support the community through its various issues. With the drought hitting Andhra Pradesh between 2010 to 2015, the 60 odd families of Paalaguttepalle lost their jobs as farmers with land owners around their hamlet, leaving the community and volunteers like Aparna with a new problem to face.

The women of Paalaguttepalle, rose to the occasion - they had mouths to feed after all. Some knew to stitch through a few government training programmes, and some others learnt from them. They sourced tailoring machines and started stitching bags. Aparna and her friend put them up on got them their first order, and put their bags up on Facebook soon after. Some other friends joined in later to help them with designing and screen printing to increase the saleability of their products.

Today Paalaguttepalle bags have gone international across UK, US and Canada. The bags are eco-friendly, help the women make about INR 5000 to INR 6000 each, and have gotten them invited to various meets in places like Goa and Bangalore.

Of course, not all is hunky dory – just a subjective development to what wasn’t. “The money these women make is just about enough to meet their daily expenses,” Aparna tells me. “When health issues come up – and they do – they still struggle. There are no contingencies,” she explains. Malnutrition among the children of Paalaguttepalle has always been a concern, and given the lack of access to affordable holistic medical treatments, this concern has not particularly gone away yet.

But here is the good news: as the word spreads, so do the number orders increase. The women last year were able to save up money and buy themselves bits of gold – “just about enough to be sold for a few thousands, when in need.” Owing to their popularity, albeit among a small market, they have now diversified to making pickles as well.

So far, good enough – is what I understand of my interaction with Aparna. Just like her, the women of Paalaguttepalle don’t particularly see why any of this needs celebration. Positive acknowledgement, maybe. But otherwise, this is an activity of need, not necessity.

Reminds you to remember that ‘entrepreneurs’ are just a word apart from the rest, when language becomes the politics of privilege. Everyone else is just finding ways to live." 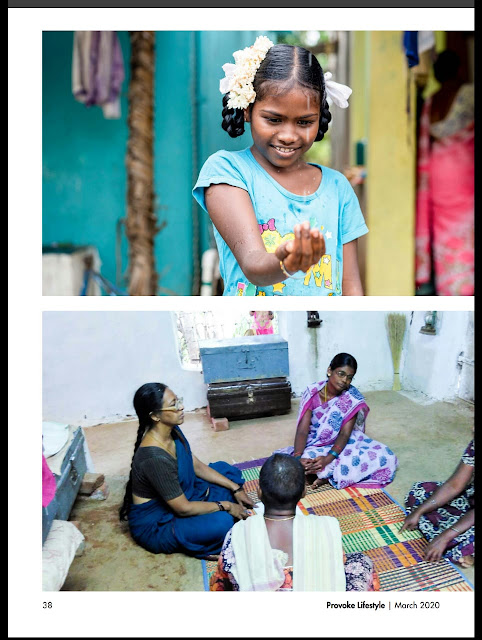 Posted by Aparna Krishnan at 01:59