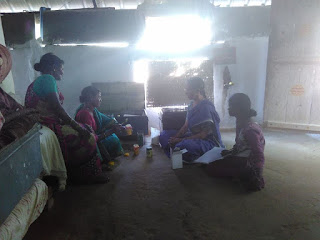 Under guidance from Sanjeevani, the medicine chest has been set up in Paalaguttapalle.

Eashwaramma reports
"Chinakka told me to select a nice jacket piece, and that she will pay for the stiching also.
She said, 'Nee dharman tho intha baagunnanu, cooliki kooda poothunnanu' (I am we well because of your dharmam. I am also able to go for coolie work now.)
I told her no need for all that."
Chinakka and her husband Nadupanna are old and suffered severe knee pains. They were surviving on the small pension he got. They came to Eashwaramma for ayurvedic medicines. The oils and gruthams (ghee based medicines) were rain on parched land. Caused by a lifetime of overwork and undernourishment.
In weeks they were much better. Guggulu Tikta Grutham, Brihatchagalyadi Grutham, Dhanvantara Tailam. To address poor blood, Dhatri Loham, Dadimadi Grutham. For general health Ashwagandhadhi Churnam.
And Chinakka is now going for labour in the fields again.

Posted by Aparna Krishnan at 20:43