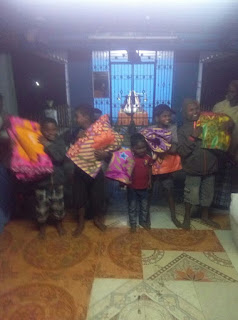 Daughter, "Tonight Varalu Akkas three children will sleep under the blanket. Varalu Akka used to cover then with two of her sarees through the winter.

There was one sweater and she used to put it on her youngest child"
Once again I shrunk within in shame. At my affluence versus the reality of all the Varalus. We had a blanket for under the mat and one or two over us, and we would still feel cold. In December and January.


The people contributed money for the big auto in which they got the blankets down from the lorry office in Pakala. Yesterday. And shared them at the temple.
Happiness is ... a warm blanket in cold winters !
Thank you Naren Somisetty, Ashok Urs for crafting this happiness !
13 December at 21:51 · 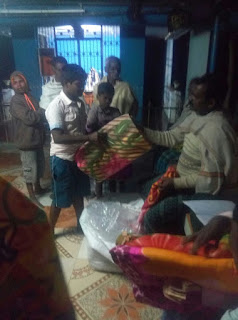 The village is very cold in December and January. I need two blankets over me. And a blanket over the mat on the mud floor. In the other fifty homes there is usually one sheet between three of them. That was one of the disparitities i was party to, facing all the guilt implied.
Naren, my friend, whom again I have not yet met apart from here on FB, had been asking what the village would need in winter. I kept saying, "Nothing, really". Then when he suggested blankets I grabbed the idea, though i was worried that it may cost too much. But he saw it through. Sixty blankets. One for each family.
Ashok, another friend whom I have not yet met, did all the work towards organizing it from Bangalore. Searching for the largest sizes, as the whole family will be under one blanket. the warmest ones and the best price. And finally handing it over to Navata lorry transport today. And I told Eashwaramma that the blankets will come to Pakala, and that they have to organize collecting them, and distributing.
I feel warm already. And am waiting as eagerly as the village people are for the blankets to reach.
(Naren has done much more. He has been giving ghee to all the children daily with their midday meals. The meals are otherwise sadly deficient. 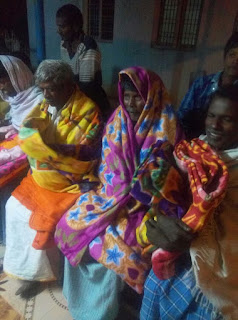 Ashok has done much more. Organizing things the women need for their stitching like 2000 zips ! Getting them in bulk at the cheapest rates, getting the zips manually fixed, and sending them down by post. Repeatedly.
It is a pleasure to connect up good people in the village with good people elsewhere ... )

Posted by Aparna Krishnan at 09:01