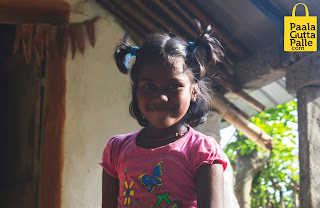 Last night the phone rang. My daughter took it.
"Give the phone to madam", was the terse instruction she got.
From Keerthana, Anithas daughter. Class 5. Our neighbour.
Keerthana and i have a deal. Every evening she has to go home. Eashwaramma has the keys to our home. Pick up a Telugu story book. read for an hour. Sitting near her mother, stitching busily on her machine.
And after the hour, call her up on her fathers phone and tell me.
I will make a note. And when I go to the village get her a chocolate for each day. If she skips a day, the previous days are all cancelled.
Keerthana keeps her side of the deal If she skips a day she does not object if I cancel all the previous days.
She only made a suggestion. The other day. That instead of chocolates, i can get her a frock instead. We will not work out how many chocolates will be equal to a frock.
Shes very smart. Her Telugu reading speed had however come down. Due to disuse.
So this deal. Deals with Keerthana always hold.
Posted by Aparna Krishnan at 09:10 No comments: 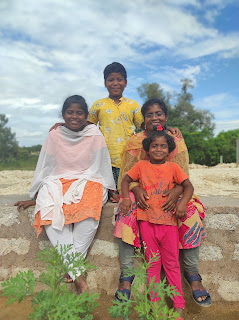 Sowjanya, Gowri's younger sister, is joining her diploma in Vemu College, 10 km from Paalaguttapalle.
They are four children at home, Gowri, Sowjanya and their younger siblings Reddy and Chandni. Their parents do agricultural labour for a living. The children also work very hard at home, taking care of the cows and doing other chores, along with their studies.
Then schools were closed for 2 years thro Covid. The lockdown took a huge toll on first generation learners in the village, as they tried to study thro WhatsApp notes from teachers on a shared cracked phone. There was poor net connectivity, and no guidance at all. But despite all challenges, Sowjanya did her best, and got a good rank and got admission into a private college.
Last month however her father needed an emergency surgery, and was advised 6 months rest. In a landless family, dependent on daily wage work, loss of an earning member is catastrophic. 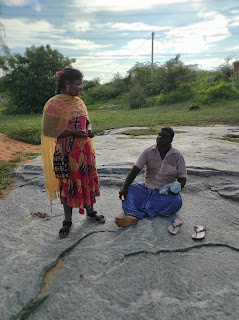 Sowjanya called me up that day to say that she would not join, and would instead take up some small job after 10th. I convinced her not to think on those lines, that she needed to study and we would figure things out. It took effort, but she agreed.
In Sowjanyas first day in college, two days ago, the children were invited to come on stage and say a few words. She was one of the three who walked to the mike confidently. After her short talk, she was given a pen as a gift. This is a source of immense pride and joy to her.

We are all so proud of her.
To make the entry to a diploma seat is many times a far far greater achievement than getting into an IIT. The starting point in the most important point to note. Not the end point.
Posted by Aparna Krishnan at 06:24 No comments:

Every public exam is a lie

#NeverForget
35% is many times far higher than 99%.
Every public exam is a lie.
It's stories deceive.
What can be measured. Is only the distance the child has walked. The leap.
It's not the same finishing line.
A child in poverty, growing up malnourished, with illiterate parents, in poor quality government schools. Dealing with illness and debts at home.
Writes the same public exam as a child with educated parents, well nourished, well supported.
... And then, we the privileged, speak of objective quality. Of IIT. Of MIT
... A nurse could be a ar greater success story than a doctor.
35% is many times far higher than 99%. 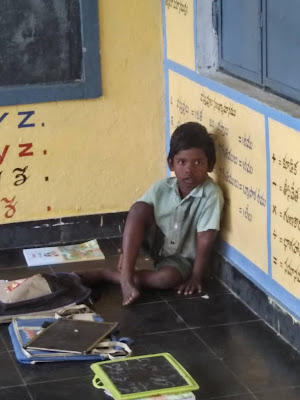 Posted by Aparna Krishnan at 22:36 No comments:

The saddest picture before me is Varalu in her bridal finery. Flowers in her hair, a dozen bangles in each hand, in a beautiful pink saree. Looking way younger than her thirty years.
She has been in finery since her husbands death, ten days ago. All of which will be rudely wiped away on the devasam function this Sunday, after which she will never be allowed glass bangles, or kumkum, or flowers in her hair.
Before her, I told her mother, Chinapaapakka that she needed to refuse to permit this. That in towns all this has now been bypassed. That to put her through this at her age was a crime. he mother was tearful, but she was firm that in a village it is not permissible. But she discussed with other women quoting me, and though they agreed with the logic, they said it would never be acceptable.
India has a long long way to go. In life Varalu' husband was of little use as he drunk away his life. But in death also he leaves her will many many permanent labels and marks.
In the personal and political the women's struggles are long drawn. Common collective struggles.
61Arun Kombai, Karpagam Vinoth and 59 others
16 Comments
2 Shares
Share

Posted by Aparna Krishnan at 03:14 No comments: