Childhood in our village ... 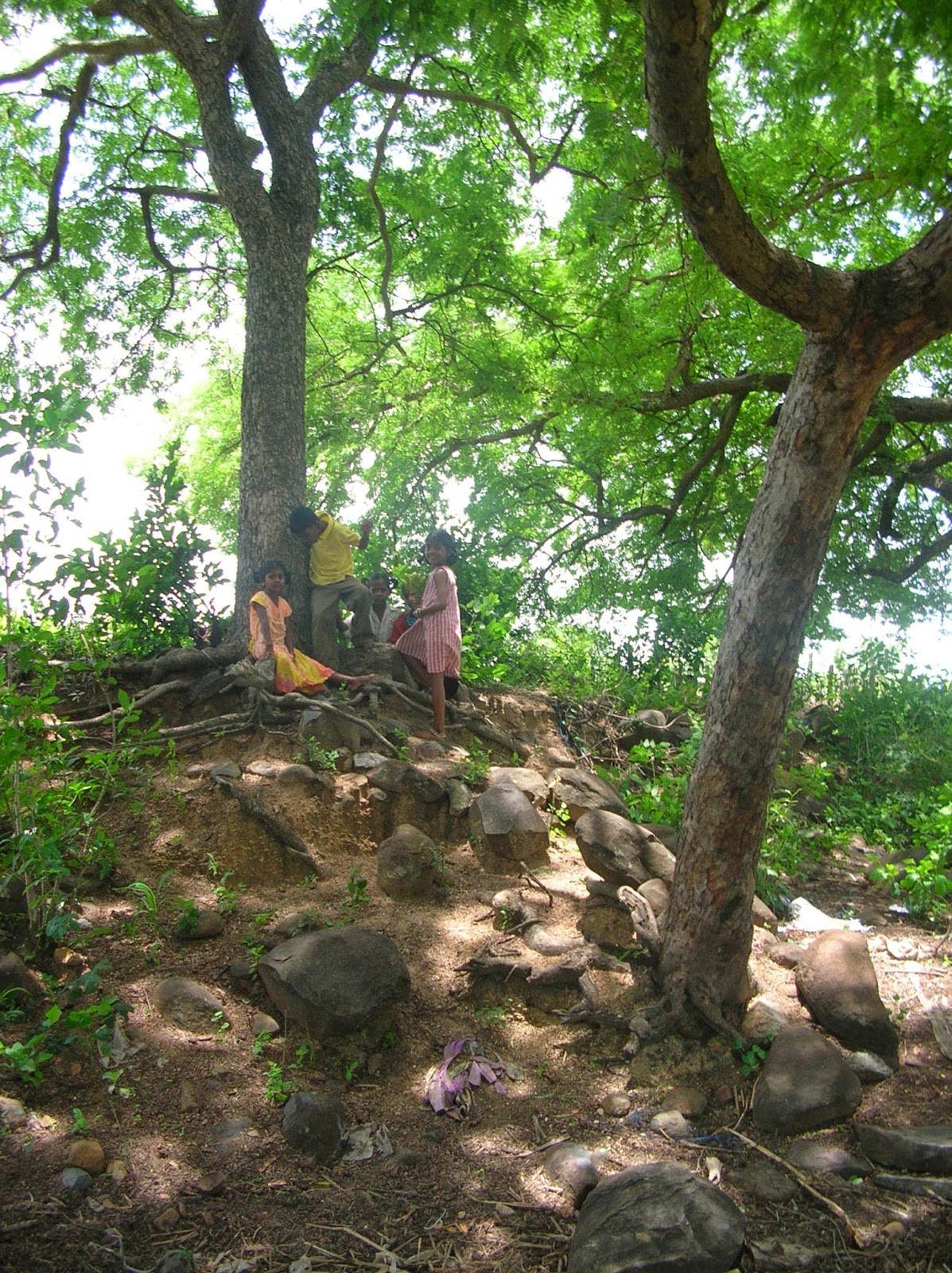 Under the tamarind tree endless games are played with bits of pot shards and stones and leaves and flowers. Meals are cooked, marriages, pregnancies (complete with a pillow stuffed under the dress), births and deaths happen. Elaborate jewellery is made of weeds and flowers. The little boys beg to be included in the games and are usually given secondary roles like attendants.

Henna leaves are collected, ground and applied on hands. The boys also love putting henna designs on their palms.

The children make ‘parani’ to apply on their hands. This is made by mixing kumkum with jaggery distillate or coconut shell distillate. To make the distillate two pots are taken. Jaggery or coconut shells are kept in one pot, and a small vessel is balanced over the jaggey or coconut shell pieces, into which the distillate will collect. A second pot is placed over the first and the joint is sealed with cowdung. The fire is lit, and some water is poured into the second pot. The ‘gas’ keeps trying to escape from cracks in the cowdung, and the cracks are constantly resealed. After awhile the distillate collects in the vessel in the lower pot. The cowdung seal is removed and the the distillate taken out. This is mixed with kumkum and applied  with a stick on their hands, making various designs. This colour lasts for two to three days. The jaggery parani is preferred as the paint on the hand does not crack as in the case of that made with coconut shells. But coconut shells are easy to procure by scouring ‘dibbas’. Dibbas are heaps where people dump their cowdung and kitchen waste to later use as manure. Children search here for the coconut shells! Boys and girls apply parani and henna.

The girl children all pierce their noses too. By ten years most have their noses peirced. They all want to, and the pricking is done locally by some adult with the thorn of  the naagadaru (Opuntia monacantha) cactus. The pain is manfully borne ! The girls pluck flowers and string them together and wear them. The little ones learn to tie flowers from the slightly older ones. They first learn the noru kattu or mouth knot, in which  they hold the thread in their mouth as they tie, then the kaal kattu or foot knot where the toe is used, and then the chei kattu or hand knot done with the hand. The maanmalli (Millingtonia hortensis) tree flowers in season and carpets the floor with sweet smelling white flowers. The children collect these and twist them into a string to make garlands.

During the rains water lilies appear in the pools of water. The children string the stems together and make chains of them. There is ‘lipstick kaaya’, fruits of the bachchalachettu creeper, which has fruits which are crushed and rubbed over the lips for a bright redness. There is also a flower they call ‘lipstick poovu’ that they use to crush and rub over their lips for colour. The children chew wild tulsi (Ocimum sanctum) and bark of tangedu (Cassia auriculata) to acquire a red mouth looking as if betel leaf has been chewed.

Climbing trees and collecting fruits is a continuous part of life. Children prepare a ‘dhoti’  by firmly tying a small stick to the upper end of a long one and use it to hook fruits from the highest branches.

Jyothi, now a young lady of 19, when she was eight or nine years of age spent entire days through the whole summer under the seema chinta  tree (Pithecellobium dulce)  outside our house, singing songs to the parrot on it and asking it to drop the fruits. The peak sun through the afternoon would not deter her or the parrot. The parrot would drop her many fruits.

Posted by Aparna Krishnan at 18:07