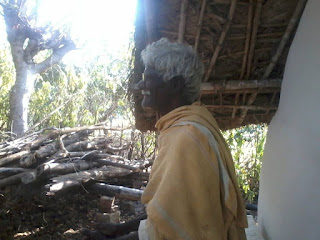 He says that it is impossible to be liked by all, "Even in the case of gods, if ten people like them, ten other people blame them …"


He says that nowadays there is greed or durasa. Earlier families stuck together, and when there was division of property, the younger brother would allow the elder brother to have more. There was respect and dignity or- 'abhimaanam'. Now that is not there, and so he says there are also no rains.

He says water goes to ‘pallam’ (the lowest level), referring to the value of humility.

He says there is the concept of rinam which decides future. A person may be married grandly with an expense of one lakh, and have no children. A person may elope and be blessed with a lakh children. He says that there is the sense of time, and the time has to be appropriate for any action to fructify.
“Sugarcane tastes different from the sugar from mills”, meaning that the same truth takes on different forms.

He comments on the value of the spoken word saying, “Everyone who is born will die. Only words live on.” He says that what remains in the end is memory … all becomes mud, but the rememberances we have of people is what lives on.

He comments on fear saying that the ant bites, not because we will take away the rice grain from it, but out of fear.

He says of the good dying, referring to Naren’s untimely death, “The god takes away the good so that they do not see the karmam (ills)”.
Posted by Aparna Krishnan at 00:25