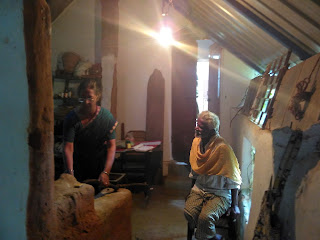 As I hear the million stories, and the nuances therein, in this illiterate, landless community, I wonder about the worth of the schooling and literacy we tirelessly and holily promote.

Annasamy Anna, " In another story, there was a sadhu who bought a cow from a butcher to save it from slaughter. He was barely ekeing out a living, but also maintained the cow as well as he could. Neither of them could eat a full meal ever though. On death he saw that the butcher was entering Vaikuntam, though he was going to Yamalokam.

When he cried out at the injustice, Yama told him that to keep an hungry creature alive is a greater sin than killing it, but he told him that he would allow him to return to the earth and expatiate his sins. His body had not been consigned to the flames as his daughter had asken the people to wait till she came. So the body had been places on the outskirts of the village, and the soul reentered the body. He got up from the bier and walked back home.
And the sadhu led a pious life, following all the prescribed daanams, and on death entered Vaikuntam.

The practice of the corpse being rested at the dimpudu gaalam prior to burial is said to stem from this story. "

Even today on death, the body is lowered at this place at the outside of a village, and then lifted again and taken to the grave"
Posted by Aparna Krishnan at 04:14