Eashwaramma's cataract surgery and after ...

A cataract camp for the poor was announced in Tirupathi, and Eashwaramma rushed there with the others. Her young grandson Sasi   told me that she went so suddenly because the camp was 'free'. Though Eashwaramma knew I would have paid for her operation, and that I was looking for a good hospital for her, she did not wish to cause expense if possible. The village people are all like that. Extremely decent and straightforward. 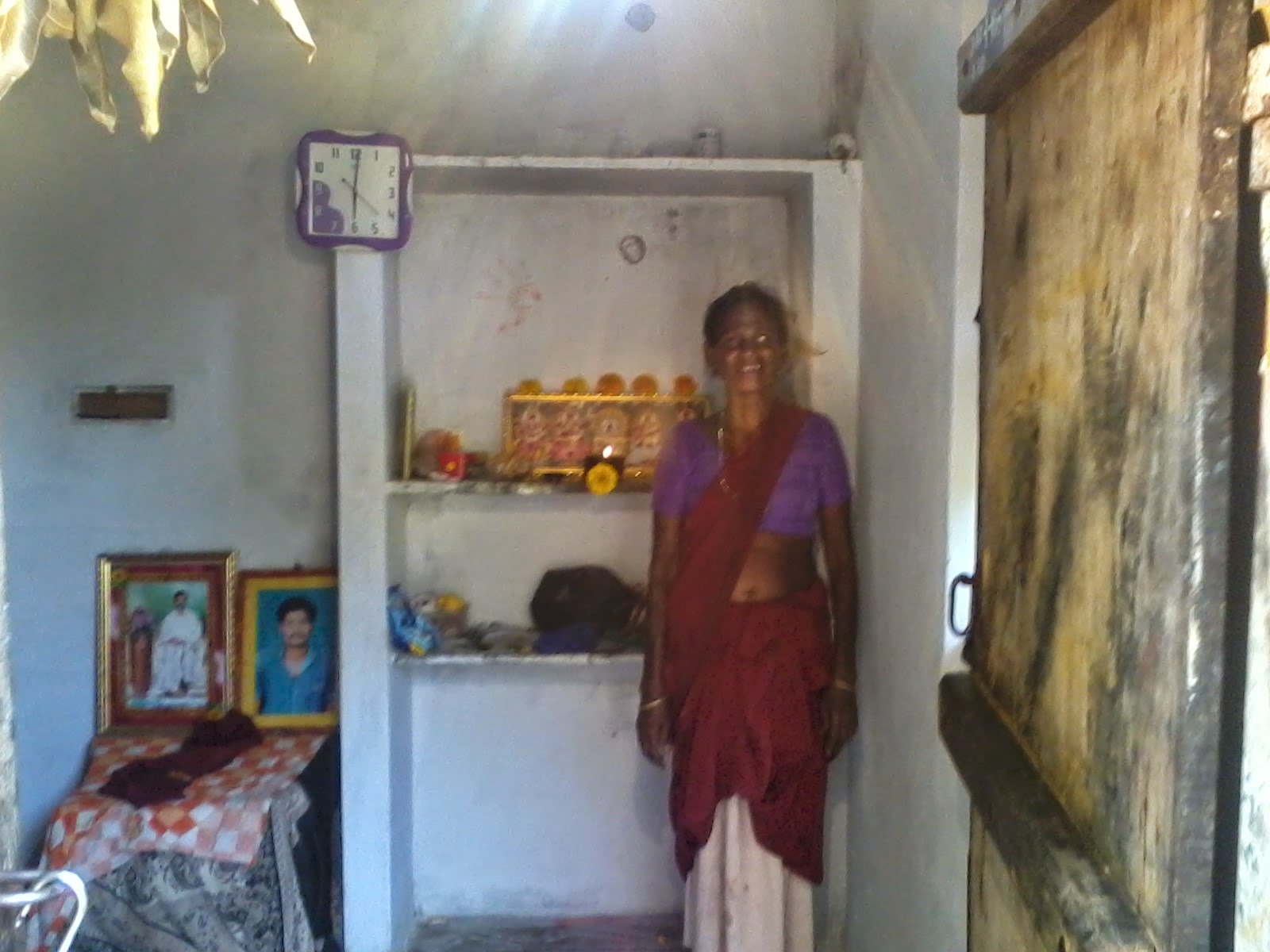 Eashwaramma, poor and landless, is the sole guardian for her two orphaned grandchildren. Her one eye was dimming with cataract, and she has always been blind in the other. She was hoping that after the cataract operation, she would be able to see clearly with her one eye. She said that then could graze her cow comfortably again as she would be able to see and avoid thorns on the way.  Eashwaramma returned to the village by bus the next day, and then I was able to speak to her and reassure myself. She had been advised complete rest for a month and she also understood the critical need for this.
The day after the operation Eashwaramma's eye which was operated on for cataract kept paining badly, and watering. Meantime her urgent worry was that her calf was unable to get on its feet. She went around gathering vamiti leaf, pounding it with garlic and pepper and feeding it to the calf. She was terrified that it might die. I was terrified she will damage her operated eye, and lose complete sight ... were she not to take the required rest.

Despite all her efforts, of feeding it cotton leaf and other preparations, her calf died, as she told me in tearless sorrow the next day. When all one has in this world is a cow and a calf - the loss is something like a complete crash. What can one do or say ? She also loved the calf dearly, and told me that its body was buried near the tank. The three days she was away for the operation she guesses that it must have grazed on something inappropriate when her granddaughter Kavya took it grazeing. Maybe mango seeds, she guessed.

Kavya, her eleven year old granddaughter,  is doing all the house work. Cheerfully. She has to cook, get firewood, collect water, feed the cow, cut grass, graze it ... and she understands that her grandmother Eashwaramma is advised total rest. 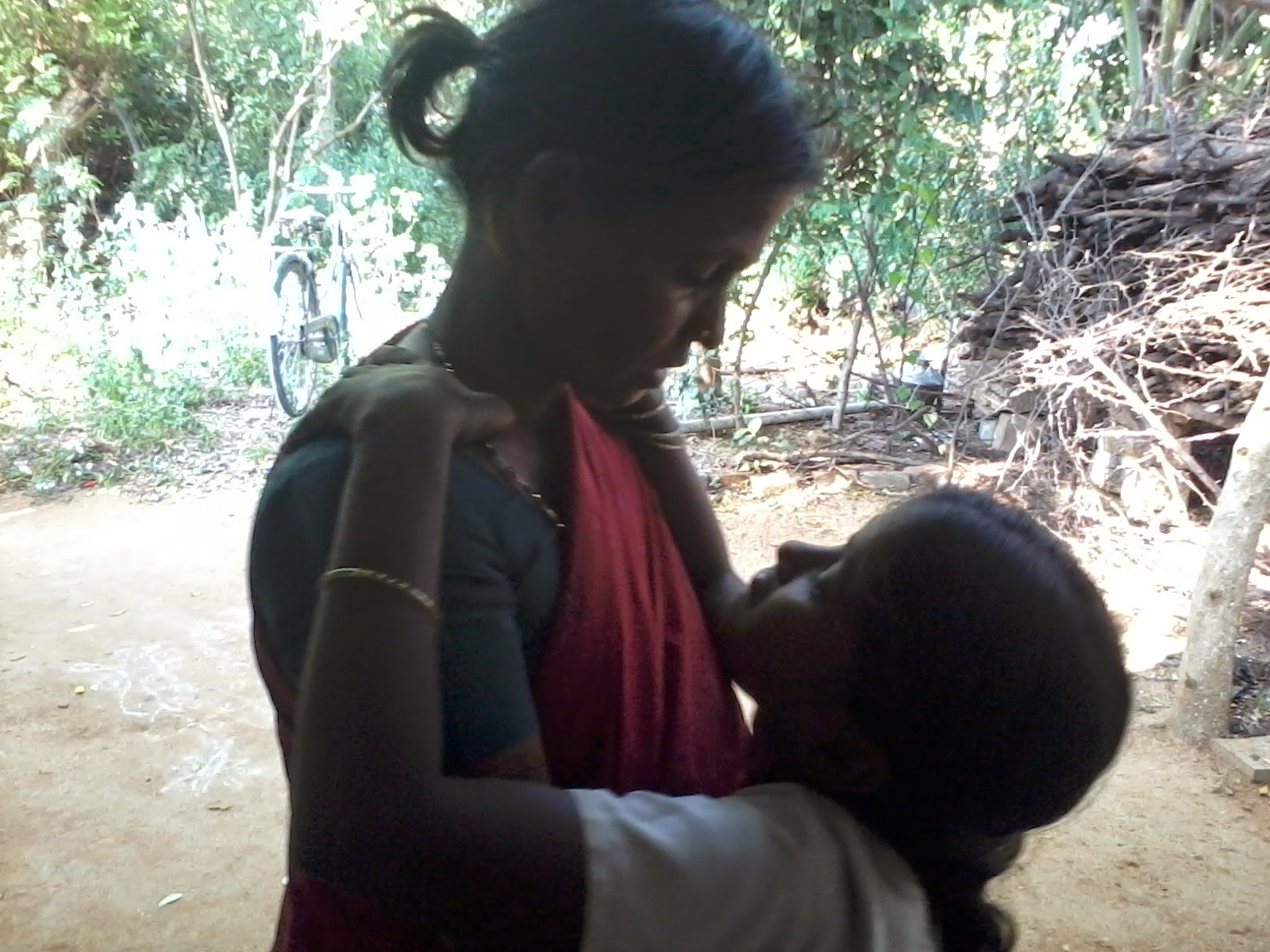 The next day, Eashwaramma's eye was paining and she had a severe headache. Then it turned out  that she went grazeing the cow in the hot sun.  Kavya and Sasi were getting into fights over who should graze, and neither went. I am unable to blame Kavya, because she is a small child being overworked as she has to run to show. Sasi, her younger brother is a scamp.

Kavya's maturity breaks my heart. Now when all the village children are coming to Chennai for a 'vacation', she is denied that as she has to graze the cow.  I thought of cancelling the 'vacation' for all the children  so at least she is not the only one without a 'holiday'.  My heart breaks ... but she seems quite accepting of the reality. I suppose she has had to accept many many realities since her father's murder, and since she has been in total care of Eashwaramma. But the day the children left, she sobbed and sobbed, and then Eashwaramma told her also to go, and said that she would somehow manage. Kavya set out with her small bag, when the other village people sent her back explaining to her that now her duty was to help her grandmother. She stayed back sobbing. I spoke to her on the phone and promised her many gifts, but my words sounded hollow to me too ... But by evening she was cheerful, and was giving me a list of the gifts she wanted from Chennai. She said she wanted a small basket of chocolates tied up with a pink bow like I had once given her!

Even three weeks after the operation  Eashwaramma's eye continued to pain. This was a cause of worry. She said when she takes rest it she is fine, but when she goes bending and working, her eye aches. I told her that after the surgery she needs rest for a month. She asks me who will graze the cow. The schools had reopened. Her granddaughter Kavya, gave up her her vacation and did all the chores through her whole summer vacation. Now that school has started, Eashwaramma will not detain her at home to graze the cow.I told her to just stall feed the cow, but there is no fodder.

Kavya continues to do all the housework, alongside with going to school.  Eashwaramma cannot light a fire because she needs to avoid the smoke. Kavya gets up very early, cuts grass for the cow, cooks, and then rushes to school. She returns in the evening and starts the fire and makes a meal,and into the night finishes her homework. I gave her my usual 'study well' lecture, and she told me that she has too much work now. And I immediately changed direction and told her to help her grandmother well.

Despite this assistance, Eashwaramma has to graze the cow in the hot sun, and says her operated eye continues to pain.

Then two days later she called up to tell me that her grandson Sasi was having a urinary problem, and asked me what she should give him. I gave her Dr. Girija's number and she spoke to her directly She wants ayurvedic medicines because she herself benefitted so remarkably under Dr. Girija's treatment, when all allopathy failed ... But medicines have to be posted from here  and in this drought the local herbs that Dr. Girija suggests to her are all dried up ...The basic medicine required is gokshura (Tribulus terestris), but even that is not there is these times of no rains. Others medicines are not available locally and I have to send them from here. No courier goes to the village.The next day she called up very worried as at nights she said his stomach would be distended and very hard and nights. I went to the post office and speed posted the medicines.
.
Meantime Easharamma then  told me that his condition is due to 'graha' (planetary configurations) and that she would get an antram tied. The vaidudu prepares the antram and ties it with some rituals. The mantram treatment is as integral to the local healing as are medicines. She was trying to organize the four hundred rupees needed for that.

She went to Thathappa at Maddavaripalle and collected the antram. He took the payment for the items but waved away the hen, a usual offering, that she took along. She brought the hen back home. She gave Sasi the ritual bath, anointed the antram with hen's blood from a small nick she made on its toe, and tied it on after lighting camphor. She told me that that very night his stomach was soft and normal for the first time in days. I told her to not have the ayurvedic medicine I had mailed down. She said that on Sunday he would also give her a medicine he would have prepared with ginger, jeera and palm jaggery to improve his appetite.

All the running around to address Sasi's condition took a toll, and her eye was hurting more. She was advised by Dr. Girija to instill breastmilk in her eyes, and she started doing that also.

Now more than a month later the pain is not there. She says contendedly, 'Everything used to be dim, and now I can see even far away things'. She is not able to see close things, and is unable to clean the rice before cooking it. But for that she will get glasses in the hospital when she goes for her next checkup. 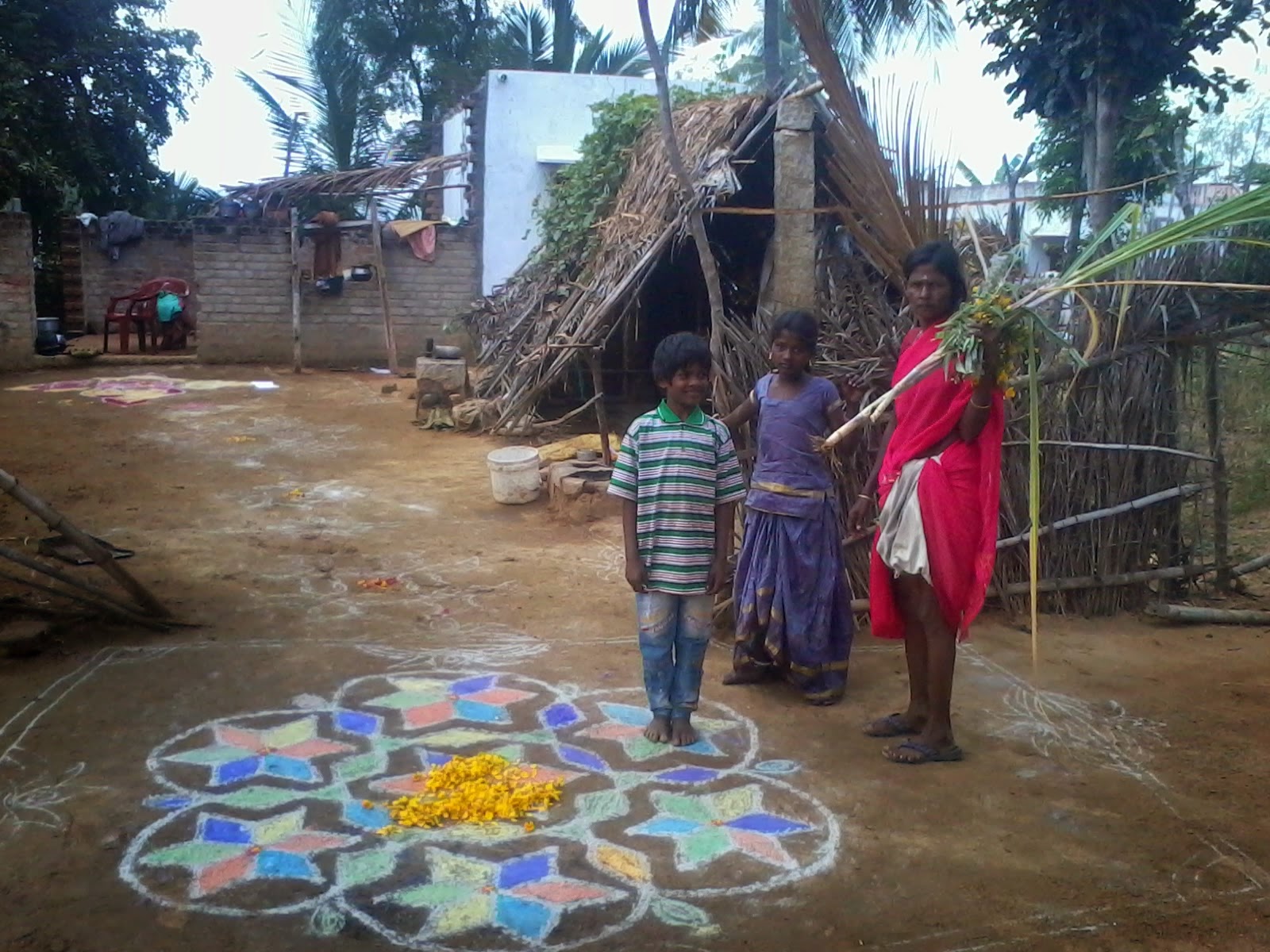 Posted by Aparna Krishnan at 10:26