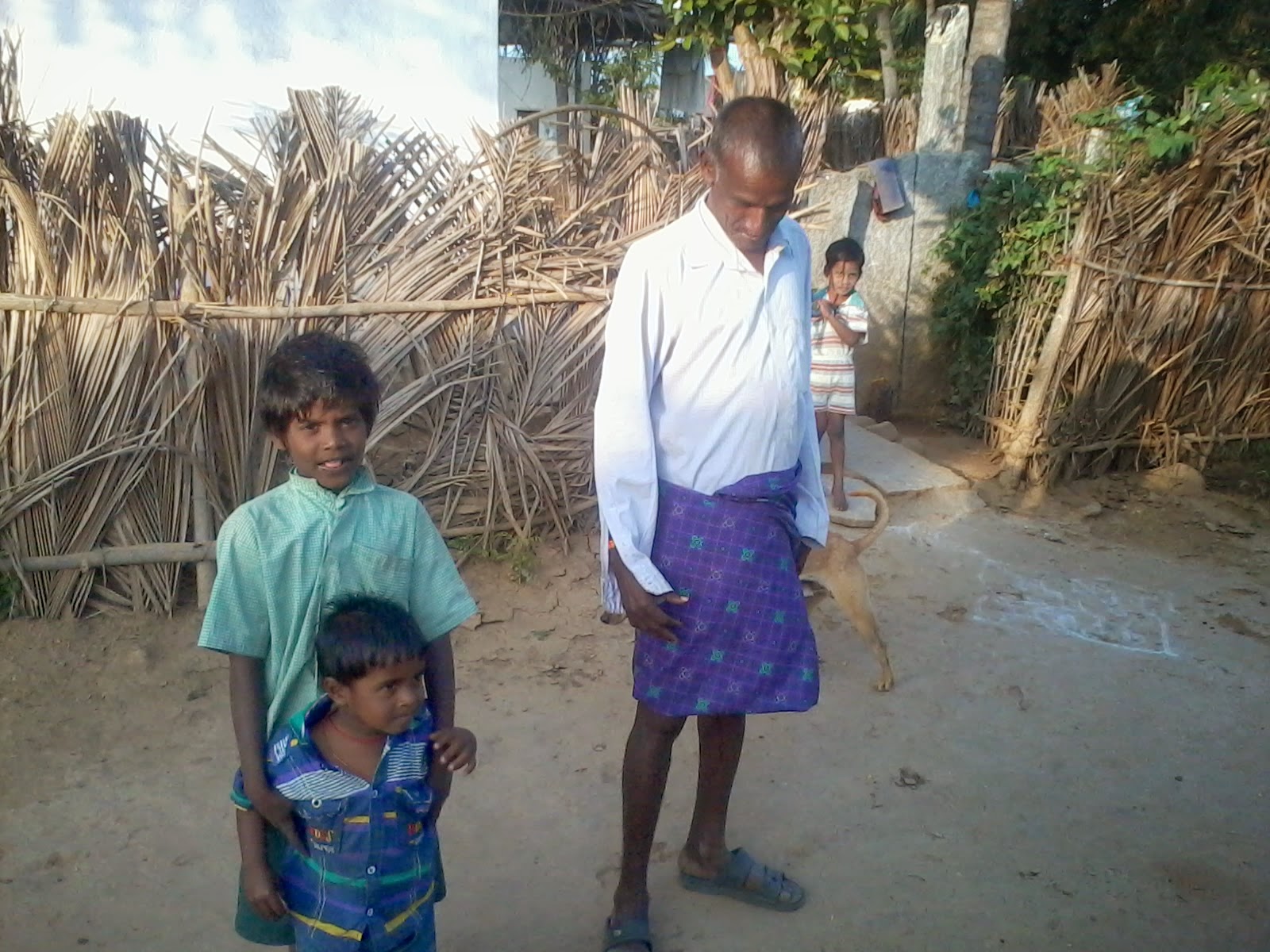 Eashwaramma's daughter Kalpana (pronounced Kalapna!) is married to a very poor, squint eyed, half blind, man at Dinapeta. His eyes had got damaged because his mother had had a handful of gilledu (Calatropis gigantica) leaves when pregnant in an attempt to abort. He does not go for labour given his poor health, and finds even grazing cows difficult as he cannot see the thorns on the path.

Everyone in the village respects him as a good and decent man. He is also an authority on the Mahabharata, and regales people with stories for hours.

... I went to Venkataiah to understand about the straw image  fashioned to the east of the temple through the Bharatam harikatha. This is said to be Kadabala Ramudu or Eilaavantudu, a waist high figure with only one side of the body fashioned. Venkataiah seated me and told me ... 'When war was declared, Sahadeva studied the stars and predicted that in the war the side would win which, on a amaavaasya night, sacrificed a man with ‘erect hair on the chest’ and born as a single child to a mother. Eilaavanthudu, the son of Arjuna by a Naga princess Ulupi, agreed to be sacrificed. But he  said his last wish was to be married prior to being sacrificed. So Krishna through his maya, took on the form of Mohini and married him. Venkataiah told me that even criminals are granted their last wish, and the granting of the last wish is very important. Eilaavanthudu had also wished to be able to witness the entire war, and so was given the boon of being able to watch with one eye, even after he was killed. Thence his straw image is erected to a side of the Bharatam and stays through the eigthteen days of the event. Krishna, through his maaya, made amaavaasya appear a day earlier, and the Pandavas performed the sacrifice and ensured their victory.'


During the Bharatam on a certian day three or four carts set out to cover the various villages which usually form the audience of this Bharatam, about fifty villages in this case. One cart covers villages around Kothapeta. Another goes along the Vallivedu path. The cart coming towards Palaguttapalle covers twelve villages. The bullock cart is anointed with turmeric and kumkum and covered with coconut fronds and mango leaves. The bullocks are decorated, their horns are painted and they wear bells on their horns and necks. As Bhima drives the cart through all the streets of all the villages the villagers place rice and vegetables and vadai and sweets as offerings on the cart to take to Bahasura. The people are given back some prasadam or offerings from the cart. People in Maalapalle gave much more food than the people in the upper caste villages.


The Bahasura story was narrated to me by Venkataiah, The Pandavas had gone to the Ekachakrapalle in Karnataka where they were given shelter at the house of a Brahmin. A rakshasa or demon on the outskirts of that village used to terrorize the people. So they made a pact with the demon and every day one family would send it a cartload of food pulled by two buffaloes. The cart would be driven by a member of the family. The rakshasa would eat the food and the buffaloes and the human being, and would not attack the village that day. When the turn of the Brahmin family to contribute a person came, the whole family was steeped in gloom. Seeing this, Kunti offered her son Bhima to go in lieu. The Brahmin refused to allow him, but she insisted. She said, ‘You have given us shelter and fed us for so long. Now this calamity has befallen you. I have five sons and I will send one of them.’ So Bhima set out with a cartload of food, pulled by two buffaloes. During Bharatam the cart which comes to all the village is pulled by two bullocks ! En route Bhima ate up all the food. Bahasura was near the cave brushing his teeth with an uprooted palmyra tree. When Bhima reached a great fight ensued, and Bahasura was killed.

Posted by Aparna Krishnan at 08:26