Ayurveda gets established in one village. 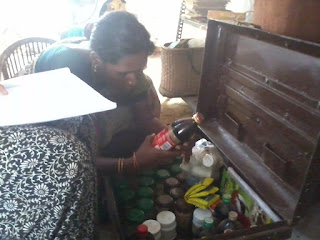 Ayurveda is getting established in the village. As people move from allopathy to ayurveda there is clear improvement in health, and also a substantial reduction in health expenses.

Varalu anchors the efforts very competently and responsibly. She maintains records of the medicines she keeps at our home (as her own small one roomed hut which accomodates herself, her parents and three small children has no place), and a record of patients treated. At any slight uncertianity she calls me up at her own cost without a second thought, and clarifies. Her ayurveda cliente is building up as people from nearby hamlets come to her for medicines.


Varalu addresses coughs, fevers, disrrhoea, wounds, piles, menstrual disorders, asthama, diabetes and other conditions. She has also been treating the village people for the pervasive conditions of anaemia (pandu) and joint pains (vata roga). The village children are given milk withs ome ayurvedic medicines and have improved remarkably, as it addressed their anaemia and also their severe malnourishment.

The move to ayurveda happened slowly and in steps. Eashwaramma was at the end of health, and she came to Madras to see Dr. Girija, and improved remarkably, and the whole village commented on it. Varalu, initially like all younger mothers felt that the best cures for her children would only be allopathy. But she took our ayurvedic medicines because she could not afford to take the children to allopathy. She saw them recover well. And then after she started the children on Rajanyadi, the medicine of choice for small children she saw their health build up rapidly and substantially so much so that they completely stopped falling ill. With her own faith fully established with her children recovering health so completely, she has been treating all conditions with confidence. And when she tells the other mothers with firm and quiet confidence, they listen in a way they did not listen to me. And other patients from the village with serious complaints, like Redipa with his heart complaint,  have come to Madras to meet Dr. Girija and recovered well. And their statements of the efficacy of ayurveda carries weight in their community. And villages take to ayurveda smoothly as it dovetails completely with their own local practices.

Varalu called up to confirm the ayurvedic diabetic medicine her mother should have. Then she told me how when she cured Vinay's swasam (asthama) yesterday. She said she was  scared, because the attack was frightening in its intensity. She said the child's parents wanted to take him to the hospital, but she asked them to wait for two doses of medicines to work. She said that after the first dose itself the child improved considerably. I told her she had saved the family 100/- . She said '100/- madam ? It would have cost at least 400/-, the medicines and tonics and all that.' With basic ayurvedic medicines, and decoction of Aadathoda leaves she sorted out his condition. 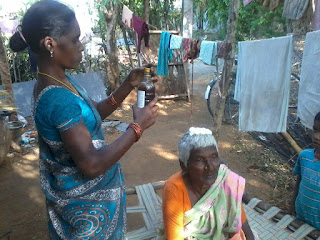 She called up at night and asked, 'Can I give Krishnayya Brihatchagalyadi grutham for his joint pains as I do for the others ? The ghee is a littler sweet, and he has sugar.' Her immediate analysis and question impressed me as muc as her responsibility in calling up at her own cost to check up.


Varalu called up to tell me that Kiranmayi's mother was feeling much better after one week of Guggulu Tikta Grutham and Dhatri Loham that she gave her to address her knee pains and chronic anaemia. They are from the Kumaravaalu caste in the next hamlet, as poor as the poorest. I was grateful for her improvement.

Neelakka from Bandakadapalle, the Balija hamlet, has been coming to Varalu for medicines for her chronic stomach ache and sciatica.

And thus Varalu is anchoring Ayurveda in one remote poor village like I would have never imagined. One does not need 'degrees', and  basic literacy is enough. Varalu has it in her to address with patience and confidence all communities. She is also never over confident, and calls me up, and then I refer to Dr. Girija when needed. And thus the best of treatments percolates. ...

One Dr. Girija in Chennai, one Varalu in Paalaguttapalle, two trunkfuls of ayurvedic medicines at home ... and together drawing on the writings of Charaka,a rishi of 5000 years ago, and reestablishing ayurveda. Slowly, but steadily. 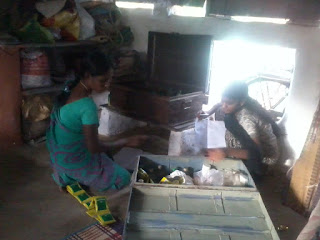 Varalu. Abandoned mother of three small children, poor, landless and unasseted. Wise and kind physician to the dalit community. Varalu is also getting a salary for her ayurvedic work. The satisfaction of healing others, and the confidence of getting a small sum towards upkeep of her three small children dependent on her entirely, has healed her of her own hurts. 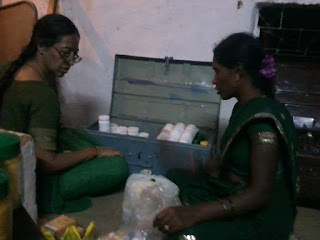 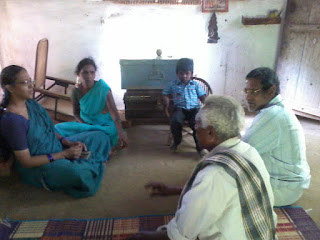 October 2015 - And patients from other villages further away like Dinapeta have started coming to her. Patients from the upper caste village Venkataramapuram also bring their children to her, and she treats them confidently and well. 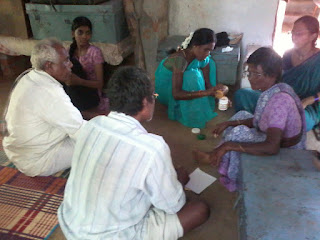 Posted by Aparna Krishnan at 10:41