Fodder and rice in times of drought.

In this grievious drought, people are holding to straws literally. To hold on to their cows, the only asset of the landless, is their main concern, with there being neither fodder nor water. Distress sale has begun.

We are trying to get this classified as 'drought affected'. It is decided based on the rainfall at the mandal headquarters, though the variation across the mandal is vast and if Pakala town has had decent rainfall, the rest of the mandal will be denied any drought benefit. That is the situation. And when once in another drought fodder camp was set up, it was in Pakala 15km away ! So no one marched their cows there in the searing heat for the fodder.

With many meetings with the collector and other officers, it is clear that even in mandals listed as drought affected available government relief is meagre. When cows are being distress sold for lack of fodder and landless farmers are losing their only assest, all that is given is some feed for pregnant cows and calves less than  six months. Too little and too late. The demands on the government front will anyway continue. That will be a long and ongoing struggle.

The other day when I called up the village and told them that it may be possible to send them money for some fodder as collected from some friends, Rediappa said, 'Madam, do. This is drought.'.

Chandra called up that night and said the twenty households that had cows had got together at the temple and were discussing modalities of sharing fodder.  When the tractor loads of rice straw comes people will bundle them into moppus together, and then share, and carry their headloads home. Everything is done fairly and meticulously in this village, as i am sure in every village.

Simhadri called up and said that the previous day they withdrew the first installment I had transferred, and as a group went to Renigunta and got three tractors of rice straw. Money was short for the 4th tractor, and they are collecting from the people and making up the deficiet to get the fouth tractor. He said the straw has all been unloaded on the rock sheet outside the village and everyone will collectively bundle it and share it out. This will sustain the 50 cows thro' the drought for a month or so now. Then we can transfer more step by step.

If each family has a tractor of straw costing ten thousand it will insure the family thro' 6 months. This will make the difference between poverty and destitution for the landless person who will lose his cows.  And tis is the time for cities to reach out to them - in earlier times these very people have supplied milk to cities, surviving on a baseline meal themselves, and even denying their own children milk. 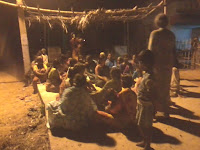 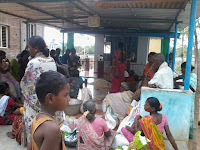 The 20,000/- a friend sent for the drought was debated over, and argued over, and finally the women told the men that they would meet the next day and discuss collectively and that the men with their arguments could please keep away. As always a meeting of women was focussed, and the men were asked to purchase rice the next day. Early morning five men went to Kallur and got 25 sacks and rice was distributed at the temple. 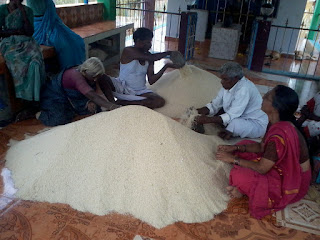 Posted by Aparna Krishnan at 03:22