Redipa, Life and Health of the poor of this country 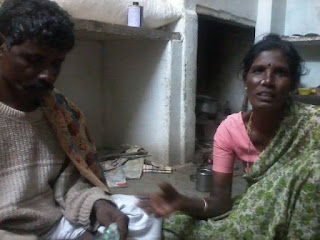 Redipa and his wife Nagarajakka  have been a hard working couple, who have only lived a a hard life of tenant farmers. In years when bore water was at 200 feet they  saved up with the sugarcane farming done on the landlord's lands, and bought a little dryland with the money earned. They had three sons - Vasu, Sudendra and Sisindri.

Then difficult times struck - and as happens with the poor, it devastates. Because there are no resources to tide them over and give a new start. Redipa sunk a borewell  with borrowed money and failed to hit water. That pushed him into deep debt of 40,000/-. One day as he returning to the village in a shared auto it tumbled. . These are doomed autos in which we travel where 16 people pack into an auto. In places of poor bus services, we take the risk in our stride ... and his thumb got damaged permanently and since then he cannot grip a spade and work anymore. He got some sheep and started grazing them instead of going for coolie work. Through all this I have never heard a word of complaint against god or man, He and his wife were grateful that he did not die, and only hurt his thumb ! The poor lead precarious lives, and one blow can move them from security to penury.

Redipa started having some chest pains which became more severe. He had spent over 5000 in MRIs and scans, which is what the poorest are being put thro' in this day of fast decreasing health spending by the government, and mushrooming private centres. Then when all that yielded no results he came to me and the Shaddharanam, an ayurvedic medicine, which I gave him worked immediately.  I had told him he would need to come and see the Dr. Girija. Ayurveda had some very powerful medicines for the heart, and even a man who labours for a living needs his heart well protected, and his condition seemed like a heart condition.
With faith in place, when another day he lifted and carried a huge rock on his head and developed severe chest pains, Varalu called up early morning and said she would bring him and come right away to Chennai and to Dr. Girija.   I was to go to the village but waited. 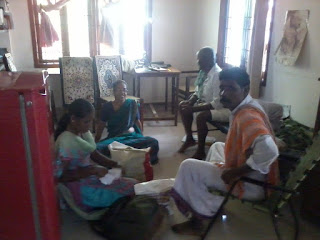 The  regard the doctor has for village people, and  the villagers have for the doctoris complete. Rediappa has a slight heart condition  but he was in the best hands now. Ayurveda, in the hands of an able practitioner, is the best for heart conditions. And I have seen heart attacks being confidently and competently treated at the clinic. The health of a agricultural labourer is critical as his only way to feed himself depends on his health.
(a week later)
Rediappa who came here with Varalu last week to see Dr. Girija for his long standing chest pain is so much better. He came to Ayurveda after spending unaffordable sums on inconclusive allopathic tests for years. In a matter of days he has improved. He was telling me that now he can run - earlier when he walked fast also, he needed to sit due to severe chest pains. I asked him who had allowed him to run. He said that as the sheep scattered he needed to run and chase them back.

(Redipa with his sheep in the distance) 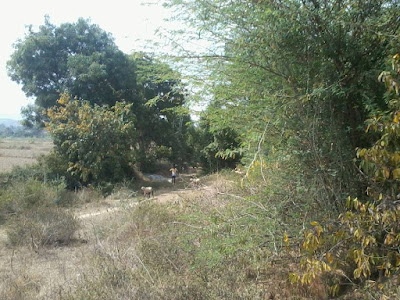 Apart from Eashwaramma's remarkable improvement at Girija's hands, it was also the very significant improvement in the health of village children after they were started on ayurveda, that made the village pause in its unthinking direction towards allopathy.
...


It is now  10 months, and he has been very well with very basic Ayurvedic medicines, Based on his unqualified recommendation to all, a friend from the village passed the information to Lata, a young woman in Tirupathi who sell corn cobs for a living, Lata, with her severe heart condition has benefitted very substantially after coming to Dr. Girija and Ayurveda, She came after spending 30,000/- on various allopathic investigations pointlessly.

Posted by Aparna Krishnan at 07:32