Gold Earrings for  Kavya.
(The Rich need to give away their gold, as they were only Trustees …) 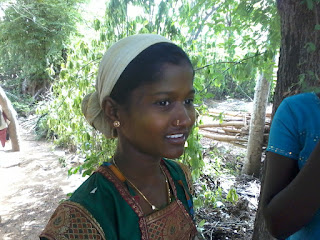 Years taught me that for the poor, gold and silver are very important. When they have a little money they buy silver anklets for the girl child and a gold nose ring. They try to save up for bigger items. These are publicly given to the girl at the coming of age ceremony or during marriage, and it is streedhan. It is her strength, and is always returned to her in any eventuality. The husband cannot pilfer it away. This is pawned in hard times, and always redeemed thro' slow and tired installments.
It takes so long to understand another world.  In my initial years in the village, I told people that they should invest in education of the girl child, and not in gold. Over years I saw that the people struggle to also educate the girl child, and also to secure her with some small asset. And they did not need my pontification. Those days I berated everyone against the 'excess expenses' of 'unnecessary ceremonies'. Over time I became part of the functions and festivities, as I had to as one of the village, I sensed the deep community bonding that develops out of each of these. As I applied turmeric of Nandini during her ceremony, as did everyone else, it was being part of the child's life through another significant step - and that is how in a village every adult feels close to and responsible for every child . Also when puberty is thus celebrated, the process of menstruation is taken as a normal event by the child herself, and also the community. All these were learnings for me, from an urban upbringing, where all this was unthinkable. 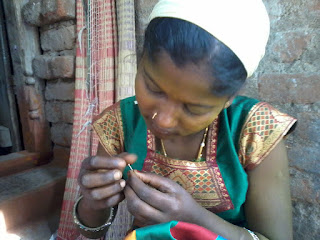 Varalu called me up and told me that Kavya had come of age. This is a significant event in a village, and there are associated ceremonies. This is also when a girl child starts acquiring some assets in her name. She would ideally get a pair of small gold earrings, or something more, or something less, as would be the family situation. This will stay her own through life, as it would be given publicly and acknowleged publicly. So through her marriage also this would be her own asset – a certain form of security. Kavya, orphaned, and with Eashwaramma as her caretaker would not have anything. But basic processes would be followed.
My friend came and gave me a pair of gold earrings, her own daughter's, and a nosering for Kavya, Eashwaramma's granddaughter. Orphaned, and brought up by an assetless grandmother, this will be her one single asset to date. Gi ven publicly, it will be her own property which even her husband cannot claim. The little bit of gold is very valuable to the poor, and especially the woman. It is pawned in hard times, and is always slowly and painfully redeemed. The fact that they have some asset gives them a confidence even in their later life.
I spoke to Kavya now, and told her that there were the pair of earrings for her given by Debolina madam'. She said 'Auna' ('Really ?') happily. Then I told her 'gold earrings', and her voice went hushed as she repeated it, and then shouted that to her grandmother Eashwaramma, 'Avva, bangaaram kammalu' ('Grandmother, gold earrings'). Eashwaramma's voice was also deeply happy.


To the poor and assetless, the sense of a basic asset means so much. Even a small child of 12 realises. Which rich child of 12 would even care for a pair of gold earrings. For them all security for basics and for all indulgences is so much assured. 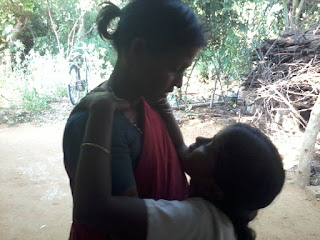 Posted by Aparna Krishnan at 02:26