Health has been addressed in villages by traditional practitioners ranging from bone setters to those vaidyas addressing snake bites to those addressing  vayu (nervous) diseases and much else. 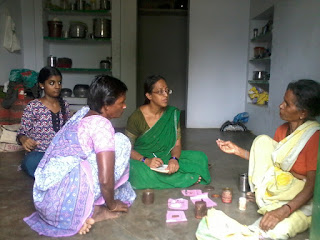 The medicines for children were traditionally dispensed by Boobamma (a term that is a variation of Bibiamma as the Muslim women in this area are addressed). The Boobammas are based in Ravanaiahgaripalle five km away. A few families there practice this, and the skill is passed down the family. Even upto fifteen years ago, the Boobammas used to walk down all villages in a wide area with their bundle of medicines, and people used to buy the churnams and pills made with herbs and minerals.

Then the village visits slowly stopped, as did many traditional practices. The Boobamma now works as an cleaner in the local private school. But there are three Boobammas  in Ravaniahgaripalle, and people go there when they need medicines. Sometimes the Boobamma   goes to some villages which are on the main road. 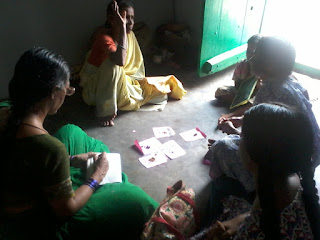 We, I and Eashwaramma and Kavya and Turiya, went  to Ravanaihagaripalle,  to meet the Boobamma  about the medicines. This is Eashwaramma's natal village, but as it is a large village unlike ours she does not personally know all the people. We took a shared auto to the village from Kothapeta, and asked for the house of Boobamma. There the Boobamma, Fatima Biwi called us in and took out her medicines.  She showed  us all the medicines and explaining their uses and ingredients. 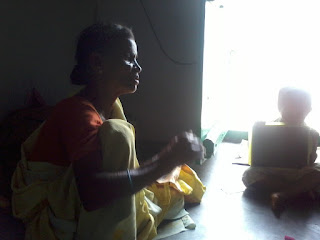 Kuttu mathirai or erra mathirai - When the babies have kuttu in the stomach due to food and milk being improperly digested, they twist and turn (nilagatharu). Then the kuttu mathirai, or erra (red) mathirai is given in the morning. It causes loose motions of a white and sticky kind. The advised diet of just rasam rice has to be followed. In the evening to stop the purges a hot water bath is given and a white paste from the naama katti is applied around the navel.

Vayu mathirai - This is a black pill given at night after the purges.

Kaaraka maathirai - This is a purgative given after a head bath. The diet restrictions are easy, and only meat ans sweets are prohibited.

Padisam podi - a white power including the white veligaaram, is given for colds as well as general immunity. If the child has a cold, the phlegm comes out through the nose.

Padisam podi and Kuttu podi are given alternately at nights with vayu mathirai. They are given with sana baala (mother's milk) or in hot water. These are also strengthening.

There were also larger medicine balls for purges for elder children. When the purges were enough, the boobamma said that buttermilk rice was to be taken, or tea, and a hot water bath had.

The raw ingredients are got from Piler or Kallur and the medicnes prepared at home. Fatima Biwi made little packets of the medicines for us to take. She said that there was really not  much money to be made from these, as the raw materials needed to be bought. In the year 2000 a package of various medicinal powders for children for cold and congestion, for purgation, and for indigestion cost thirty rupees. Now she said people may give a fifty or a hundred.


Now there are a few practitioners here like Silaramma, Husainamma, Chand bi apart from Fatima sustaining the local systems of medicines based on herbs. They are living in poverty in small one roomed houses, neat and clean, with the invariable jasmine plant as outside every Muslim home. Purveyors of a rich knowlege system, which will bite the dust, as modernity tramples over gentler systems and gentler people.

Should the system of knowlege be saved if the purveryors of the knowlege cannot be saved.  I wonder.


(As we waited on the road at Ravanaiahgaripalle for a share auto for over an hour on the way back.) 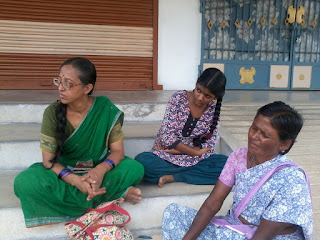 Posted by Aparna Krishnan at 22:53