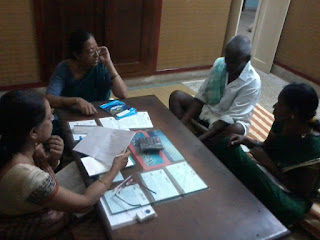 Varalu's father Sankaraiya was dismissed from the cataract surgery camp twice because of the swelling in his legs. This was a disappointment to him because despite a great fear of surgery he had worked up courage to go to the government cataract camp. His failing eyesight was hampering his grazing the cow. He also had knee pains. He was very worried about his health.

Varalu brought him from the village to see Dr. Girija in Chennai.  He was advised a change in diet, including reducing the excess chillies and tamarind which was responsible for both his severly anaemic condition as well as his severe joint pains. 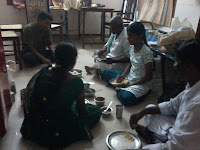 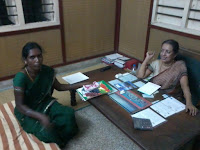 He was given basic medicines includingGuggulu Tikta grutham, Dhatri Loham and external application of Dhanvantara Tailam. He was also asked to take decoction of palleru (Tribulus terrestris) which was good for his swelling as well as an excellent tonic. As usual the local drug was collected and had and boiled with much regularity.

He has been very well. One more village patient who has moved to ayurveda from allopathy completely. One more person who has benefited from the vast experience and skill of Dr. Girija.

Posted by Aparna Krishnan at 08:20