Munishwari - suffering from a fatal condition. 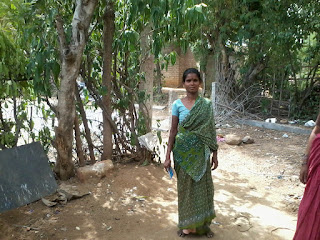 Married to the drunk of the village,landless and assetless, she is among the most malnourished and overworked women in the village. But one of the most cheerful, and her two small daughters are growing up beautifully under her care. One day she came and told me that she was diagnozed with an incurable disease. Allopathy has given her a life expectancy of 1.5 years.
Despite a resistance to ayurveda, because in her condition she knew she would be required to give up her sour and spicy foods, she came as she kept weakening with the allopathy treatments. One day her brother brought her to Dr. Girija, Chennai. 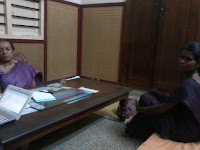 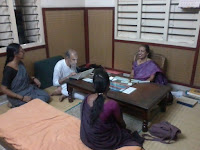 Now she is responding to ayurvedic medicines with Dr. Girija. She is being treated for rajayakshma as per ayurvedic diagnosis. The medicines are expensive, but the best of medicines have been given, and she has been taking them and feeling much better.

Given her state of utter undernutrition, and the disease itself, the medicines need to be supported by meat intake for her particular condition. I told her that I would give money for that also. She refused the money, saying that the husband would get wild seeing her spend on herself thus. What can one do ? I called up Varalu and told her it is part of her medicine work to ensure supply to Munishwari. At least in a village, and people with all differences, finally understand another's need and help out
Today when I called up she sounded pulled down. After discussing medicines, I asked after her husband, and she said, "He has gone for his work.". I said, “Drink shop ? ", and she said "Yes". It seems the last month he has been living in the drink shop. I asked where he got money from. She says he takes what he finds at home. And borrows from everyone. With her debilitated body she goes trying to earn for her children. grazing the cows, and down with a cold and fever now. What can medicines, and my limited help do in the face of such overpowering odds ? 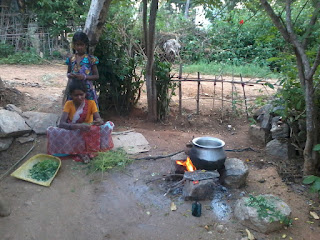 A young mother with an incurable and fatal disease, and  two small daughters to provide for, and a husband  lost to drink, and herself assetless and landless and illiterate - and   never  a word or thought of self pity. And she smiles and works through the day ...

And when I tell her to ask when she needs any expense for her daughter's studies, she simply asks for one uniform set. When I ask her if she would not need two, she says the previous year's set is only slightly small.

When I tell her that she cannot distress sell her cow, and would she need money for fodder, she says that the slight rains have given some grass cover, and she will not need any now.

When I grumble about waking up daily at night to collect our day's water from the tanker, she tells me, 'The tractor driver stays up the whole night carting water. We only get up at midnight for 1/2 hour daily' 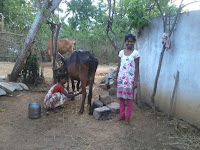 I called up Munishwari to ask how she was. She categorically and firmly told me she is feeling very well. i asked her if she had any aches now, and she said she had none and felt very well.  I asked her if her husband was drinking less, and she laughed, 'Where Aparnakka !'. When I commented on her laugh, she said she was done with weeping, and now will only laugh her way thro' the remaining time. I have only known her with a smile, and a cheerful comment, and I have known few other women with the crosses she has borne. 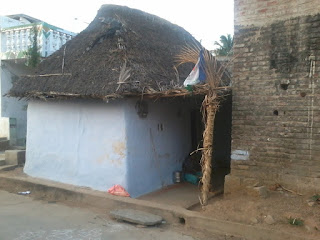 She told me, 'Come and have groundnuts', and I asked her if they had harvested. She said they had. She got 50 dabbas. When I asked she agreed that that has not covered the cost of the seed and the plowing and the deweeding. The rains were scanty and untimely, and the crop was a risk, and the gamble failed. She is deeper in debt. Who is to bear this cost and risk of groundnuts - the Munishwaris with their frail and breaking shoulders ?

Posted by Aparna Krishnan at 09:53