Treatment of a retarded child in ayurveda. 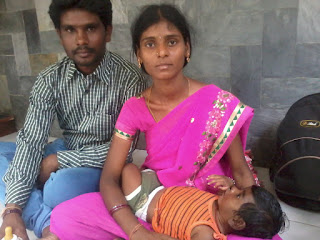 Chandrashekar and Lata came with their daughter Navyashree to Chennai to see Dr. Girija. The child, now 8 months old, suffered birth asphyxia, and has been mentally affected. But for two months she had been on an ayurvedic medicine given to her in the village by Varalu on Dr. Girija's advice. In two months she has responded remarkably, and the parents wished to come down to Chennai to see the doctor. 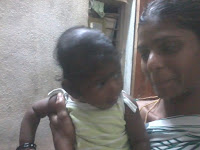 4th October 2015 photo when the child, 5 months, was only on the allopathic anti epileptic medicine. Her face was pale, and blank and eyes were unmoving. 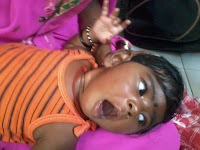 26th Dec 2015 - After 2 months of Mahakalyanaka Grutham,
It was supposed to be had 5ml twice a day, but the mother mistakenly gave a smaller dose and only once a day. The parents and the village felt the child was much better. 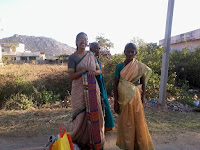 Govindamma, Navyashee's grandmother,  is the village mantrasayini or midwife. She has handled any number of deliveries. When her son and Lata, her daughter-in-law, went to the local health centre in Damalcheruvu for delivery, she went with them. In recent years, everyone goes there, as the present day schooled youth feel that its the best to take the mother to an allopathic hospital.  In the PHC, the mother is always given an oxytoxin injection to induce labour. The village midwife accompanies the family and usually does the delivery there.  Govindamma also accompanied, but in this case, as it was her own daughter-in-law Govindamma was nervous, and chose to not assist.


There was a normal delivery in the village PHC, but as the child had swallowed amniotic fluid she did not cry for 15 minutes, according to the mother, till the fluid was suctioned out. The child then cried loudly, and had milk. But after 12 hours, she started having tremors and would not have milk. In the morning the parents took the infant to a private doctor who gave a medicine. On taking the medicine her eyes went awry, and she started having fits. The parents rushed to Tirupathi with her and she was in the government hospital for 40 days, and many scans and EEGs were done.  The mother's milk had dried up in the 20 days the child had been kept in a glass box.

Finally  they were sent back with an anti-epileptic medicine Phenobarbitone  to be taken daily. The cause was stated as birth asphyxia.

I saw her when she was 5 months, and she had a blank face and unmoving eyes. We started her on Mahakalyanaka grutham. Two months later, now,  the parents said they wanted to come down as the improvement was significant.  The younger generation rarely reject allopathy, but as  the benefit was so substantial, the family came to Chennai to see Dr. Girija. The allopathic medicine had not had much effect. 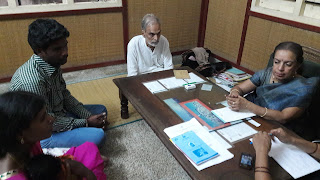 The child I saw after two months looked much better. Her paleness had gone and she was a nice healthy looking colour. The mother said she ate well and her motions were untroubled, both of which were problematic earlier. The child's weight had increased, and she was not crying like earlier. The child's eyes were mobile though she was not focussing on any face clearly and was also not smiling. The child's head was not yet firm on the neck, and she was drooling.
She has been given medicines Mahakalyanaka Grutham, Saraswatharishtam and Brahmi tailam. As the mother had already discontinued the allopathic medicines, she was advised to not start it. The mother also said that the doctors had told her that the anti-epileptic medicine woul dullen the child. 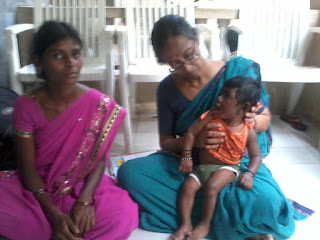 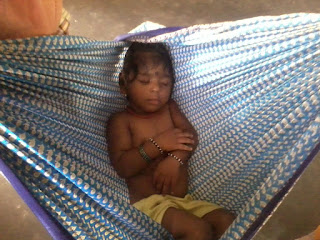 Now 6 months later the child is so much better, though she still does not sit up and has many issues. She look healthy, does not drool, looks at people, and the parents and grandmother and neighbours are categorical in the improvement they see. The ayurvedic medicines are expensive, but certianly worth any improvement that the child will have. We will just hope for the best, and for maximum benefit.

The mother is obviously deeply depressed, but what can I say to a mother whose child is born thus, and who also does not have the wherewithal to take care of her. Every word sounds so superficial. And as usual in cases of such deep pain i stay silent. 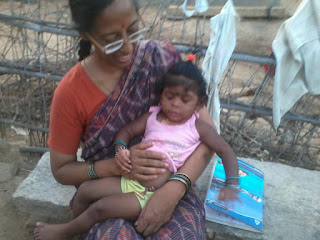 Then I realized that the mother Lata was giving half dosage only - only the morning dose. Says she did not understand my instructions. I took her to task. And Varalu for not following up. And have withheld Varalu's salary for a month. I was so upset - the child could have been so much better. Varalu is the local 'medical officer', and was to keep tabs. I think the mother is simply depressed and losing her grip. They were also to apply Dhanvantara Tailam on the child daily and give a bath, which was missed. The Brahmi Tailam which was to be applied on the head had also beem harly used. With halfhearted medication the child had improved so well. Now with proper care hopefully she will do even better. 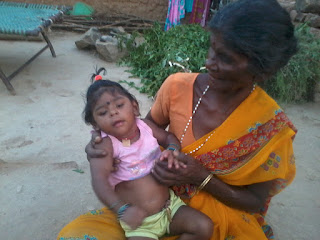 Posted by Aparna Krishnan at 09:46