Nagesh's eyes were bloodshot, a deep frightening red. My immediate response was, "Leave for Chennai and go and see an eye doctor." A little later I asked him to wait.

It was late night and I went to Lata in the other village who was nursing her baby for some breast milk. Breast milk according to ayurveda is the best medicine for the eye. Locally they rub some pure castor oil as milled at home with the milk, and stir it into a thick paste and apply that in the eye. I could not get castor oil, and only instilled the milk. In the morning the eye was a little better.

Then in the morning we went and collected leaves of the shrub tella Poolu Chettu on the way to get milk. Kavya and Turiya were with me. Govindamma, Lata's mother-in-law, is our local mantrasayini who looks at all the deliveries. She is also wise in medical lore. When I had had a persistent sandy feeling in my eyes for days some years ago, she had showed me this plant, and taught me to use it. 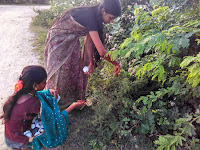 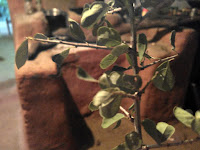 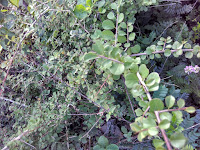 The leaves are crushed and tied in cloth and left to soak in the breast milk. And after that that cloth bundle is squeezed into the eyes. This is done morning and night. In two days his eyes became normal. 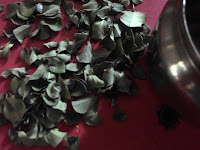 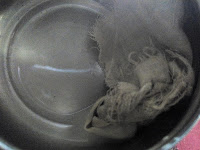 Tella poolu chettu is used when the eye burns, or turns red, or has a gritty feeling. If the eye is scratched by something, then the juice of drumstick leaf is squeezed into the eye. This burns very severely for some minutes. After instilling this for three times, breast milk is instilled into the eye thrice. My daughter when she was very small got her eye poked by a dried grass stick from the thatch, and there was a deep red spot in the eye. Bangaramma, Govindamma's sister-in-law took over and did this for her. The child became well. Since then the village people have attended to all our eye problems at home, as they do for others in all homes. 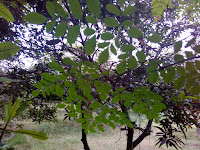 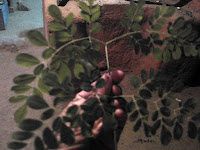 Our ayurvedic doctor in Chennai, Dr. Girija, has a deep faith in local practices in villages. She was the person who advised me to follow local advice when I had called up in distress from the village when my daughter had poked her eye. With her confidence I entered the world of their cures, and have only benefitted, and have never had to regret. My teachers have been Govindamma, Bangaramma, Eashwaramma among many others. 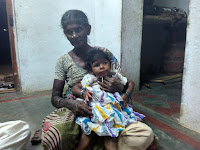 Posted by Aparna Krishnan at 08:53