Annasamy Anna - poor, landless, dalit - wise, wonderful. He comes home every evening at dusk and sits near  the fire and I put on some water for tea for both of us. by the stove as I cook. 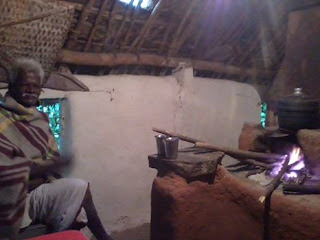 He comments on the value of the spoken word saying, “Everyone who is born will die. Only words live on.” He says that what remains in the end is memory … all becomes mud, but the rememberances we have of people is what lives on …

He comments on fear saying that the ant bites, not because we will take away the rice grain from it, but out of fear.

He says of the good dying, referring to Naren’s untimely death, “The god takes away the good so that they do not see the karmam (ills)”.

He says that it is impossible to be liked by all. Even in the case of gods, if ten people like them, ten other people blame them …

He says that differances are part of existence - that the five fingers are not alike. He says fair parents can have dark children, and can they then disown them, he asks.


And  sometimes the answer to a question is another question.
"Annasamy Anna, why should I follow Dharmam? ", I asked.
Annasamy Anna, settled down comfortably in the seat, " OK, you tell me. Why do you worry about the children ? Why do you do annadaanam ? "


And that was all the answer he was prepared to give.
And then, much later, I remembered the root definition of Dharmam in Sanskrit , as 'that which sustains (everything).
Some questions are best left unanswered. For the seeker to seek out ...


Annasamy Anna comes home every evening to tell me stories, and I put water on for tea when he comes.
He told me when I said that times have changed, ‘No, time does not change, people do. The sun rises in the east every morning ? Does that change. It sets in the west at the destined time. Only people change.’
Keertana, hanging on the bamboo gate, listens to these stories. And thus a village passes on knowlege from the old to the young.

Eashwaramma says, “The sun is cursed in the sense that when there is no sun due to clouds, we curse it, and also when it comes out in full power, we curse … saying it is too hot. ‘Should we say so ?’”

Posted by Aparna Krishnan at 11:12